When parapsychology professors Dr. Peter Venkman (Bill Murray), Dr. Raymond Stantz (Dan Aykroyd), and Dr. Egon Spengler (Harold Ramis) are fired from their university positions, they decide to open their own ghost expulsion business. Released in 1984, Ghostbusters is a horror comedy film brimming with food moments, making it an ideal choice for the October horror series here on food & a film.

The film’s first notable food scene takes place in Dana Barrett’s (Sigourney Weaver) kitchen, which turns out to be a significant location in the film. As Dana is putting away groceries, the carton of eggs on the counter vibrates open on its own, and one by one the eggs begin to explode and fry on the counter. In addition to the carton of eggs, we can see a large bag of Stay-Puft marshmallows and a bunch of greens on the counter, as well as a loaf of bread and box of pasta, which Dana unpacks and stores in a cabinet. Following the shocking spectacle of the exploding eggs, Dana is then horrified to discover a supernatural presence in her refrigerator.

Following this haunting food moment, we see Egon and Ray snacking from a box of Cheez-Its, with Ray drinking a Budweiser, while they discuss Dana’s paranormal predicament. Venkman then accompanies Dana to her apartment to survey the scene of the spectral occurrence. Upon opening Dana’s refrigerator, Venkman remarks, “Oh my god… look at all the junk food,” before picking up a package of Oscar Meyer lunchmeat and asking Dana, “You actually eat this?.” Amongst the shelves of perishables in the fridge, we can see cans of Coca-Cola, a bottle of Wish Bone salad dressing, bottles of Perrier, and multiple containers of leftovers.

Following the visit to Dana’s apartment, Venkman shares a meal with Ray and Egon at the former firehouse. Multiple Chinese takeout boxes fill the center of the table, and Ray and Venkman each have a can of Budweiser, while Egon has a can of Coke. The three lift their cans and cheers to getting their first (and only) customer. Venkman then tells the two that he will need to draw some petty cash to take Dana out to dinner since they don’t want to lose her as a client. Motioning to the Chinese takeout before them, Ray replies, “Uhhh… this magnificent feast here represents the LAST of the petty cash,” to which Venkman responds, “Slow down. Chew your food.”

The trio’s petty cash meal is then interrupted by a call to remove a ghost from a rather elegant hotel. Upon arriving to the floor where the ghost was last spotted, the three split up and begin to search before Ray dumbfoundingly discovers the ghost, Slimer, eating from a room service cart. As Ray watches Slimer stuff his mouth with plates of food from the cart, he remarks, “Disgusting blob,” before attempting to capture the apparition with a proton beam. When Ray misses, Slimer is scared off, but then retaliates by sliming Venkman before retreating to the ballroom downstairs. Then, while in the ballroom, Slimer downs a bottle of liquor taken from a buffet table topped with a spread of food and drink, including a tiered cake, which later explodes after being hit with a proton beam.

Another particularly food-filed scene is during the party Lewis Tully (Rick Moranis) throws at his apartment. The camera pans across a long buffet table containing an impressive spread of smoked salmon, a bowl of cornichons, a crudité plater with green goddess dip, and a platter of bagels. Lewis tells the party-goers, “Hey, this is real smoked salmon from Nova Scotia, Canada, $24.95 a pound.” Lewis also mentions that there is “room temperature” brie available, and among the guests in attendance, there is a man snacking from a full-size bag of Fritos.

Additional food moments include Egon using a Twinkie to explain the amount of psychokinetic energy in the New York City area, Dana chopping bok choy and drinking wine in her kitchen, Venkman handing Egon a Nestle Crunch Bar, Venkman and Ray drinking Hiram Walker Apricot Flavored Brandy, Lewis sniffing a large canister of popcorn and then rubbing a piece of pizza on his face, Slimer emerging from a hot dog cart with a mouthful of hot dogs, and the Ghostbusters being covered in marshmallow fluff after defeating the colossal Stay-Puft Marshmallow Man. 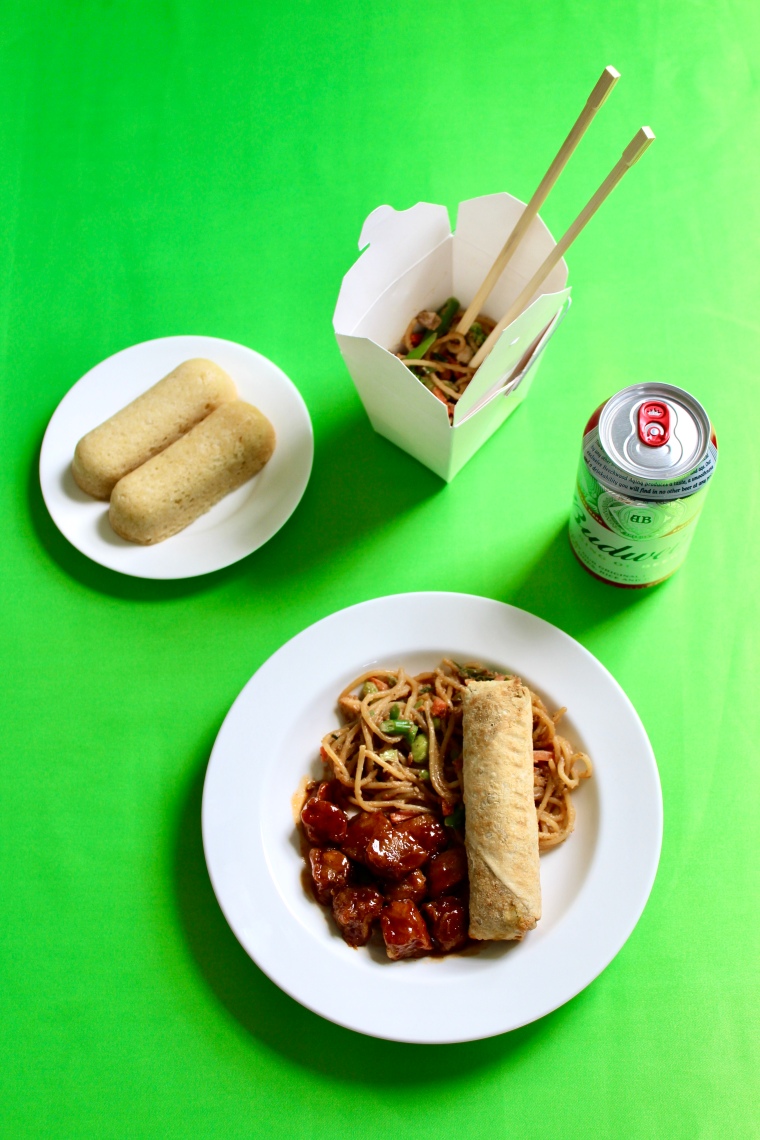 For my Ghostbusters vegan food pairing, I decided to recreate the Chinese takeout meal that was paid for with the last of the petty cash. For dinner, I went with vegan sweet & sour pork, Chinese noodles with vegetables, and a vegetable egg roll. And for dessert, I made homemade vegan Twinkies with a marshmallow fluff filling. 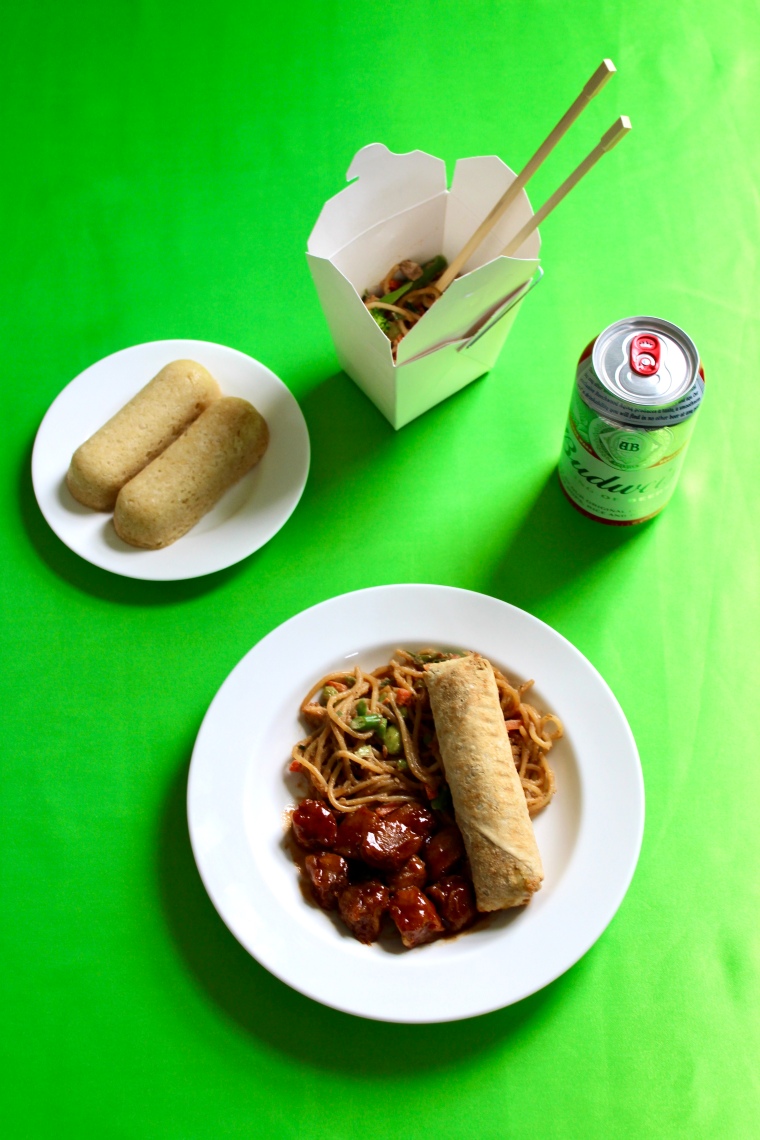 Then for a beverage, I chose to include a can of Budweiser since it appears more than once in the film and is, in fact, vegan! Personally, I am ‘Team Egon’ and would prefer to have a Coke over a Budweiser; however, since Coke has been featured on the blog before, I decided to change things up and go with a beer instead.

Finally, to complete the table setting, I selected a Slimer-green fabric to use as a tablecloth.

Thanks so much for tuning in for another installment of food & a film! Make sure to check back next week for another horror classic. Until then!