Upon assuming the role of caretaker at an isolated hotel during its shuttered winter season, Jack Torrance (Jack Nicholson) begins to descend into madness, endangering his wife, Wendy (Shelley Duvall), and son, Danny (Danny Lloyd).

Released in 1980, The Shining is not only one of the greatest and most unsettling horror films of all time, it is also a film that contains a considerable amount of food moments, making it an excellent choice to kick off the month of October here of food & a film. 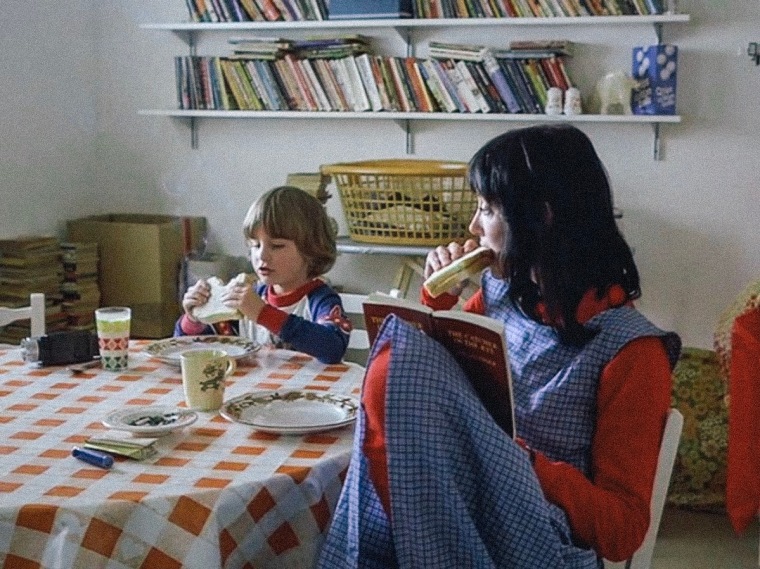 Less than five minutes into the film, we are treated with our first food scene at the Torrances’ apartment where Danny and Wendy are having lunch. Both Danny and Wendy are having sandwiches; Danny eats his sandwich while watching cartoons (Road Runner based on the “beep, beep” sounds), while Wendy has her sandwich as she reads “The Catcher in the Rye.” If I had to guess, I would say that Danny’s sandwich is peanut butter & jelly, whereas Wendy’s sandwich appears to have cheese on it; yet, it is quite possible that both are enjoying the same type of sandwich. Also, for their drinks, Danny has a glass of milk, whereas Wendy has a mug, presumably of coffee.

The next notable food-related moment comes when Danny tells Jack that he’s hungry while the family of three are in the car on their way to the Overlook Hotel. Jack responds telling Danny, “Well you should’ve eaten your breakfast,” yet, Wendy assures Danny that they’ll get him something as soon as they get to the hotel. In the following scene we see that they did in fact get something to eat as Jack is sitting in the lobby of the Overlook with remnants of his family’s lunch on the side table to his left. Stuart Ullman (Barry Nelson), the hotel’s general manager, joins Jack and remarks, “glad you made it before they shut down the kitchen,” as Jack bites the remaining piece of sandwich in his hand. 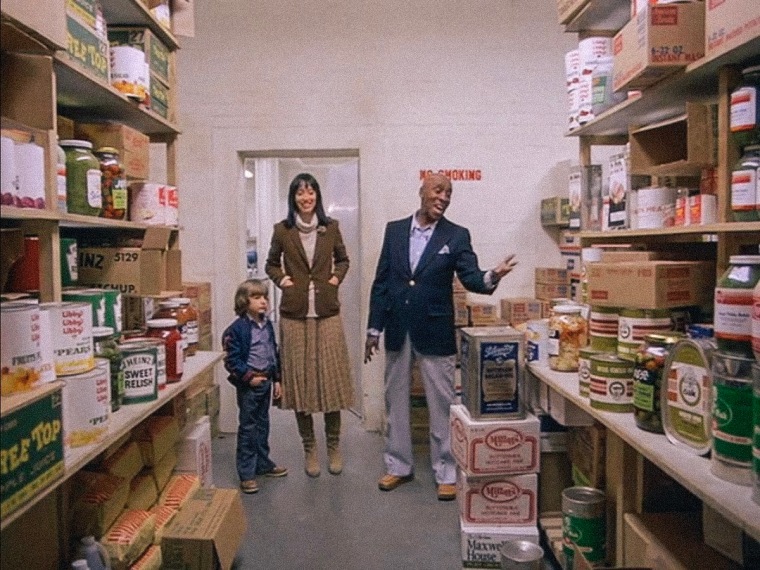 Following this scene, the hotel’s head chef, Dick Hallorann (Scatman Crothers), takes Wendy and Danny on a tour of the kitchen. Dick tells Wendy and Danny, “you won’t have to worry about food, because you folks can eat up here a whole year and never have the same menu twice.” He then proceeds to show them the meat locker where there are “15 rib roasts, 30 ten-pound bags of hamburger,” as well as, “12 turkeys, about 40 chickens, 50 sirloin steaks, two dozen of pork roasts, and 20 legs of lamb.” Dick asks Danny if he likes lamb and when Danny says, “No,” Dick asks, “Well, what’s your favorite food, then?,” to which Danny replies, “French fries and ketchup.”

Dick then takes Wendy and Danny to the large pantry room where all the dried and canned goods are kept. Dick tells them that there are canned fruits and vegetables; canned fish and meats; hot and cold cereals including Post Toasties, Cornflakes, Sugar Puffs, Rice Krispies, Oatmeal, Wheatina and Cream of Wheat; a dozen jugs of black molasses; sixty boxes of dried milk; thirty twelve-pound bags of sugar, as well as dried peaches, dried apricots, dried raisins and dried prunes.

Following his pantry monologue, Dick gives Danny some chocolate ice cream while Wendy joins Jack to finish the tour of the hotel. 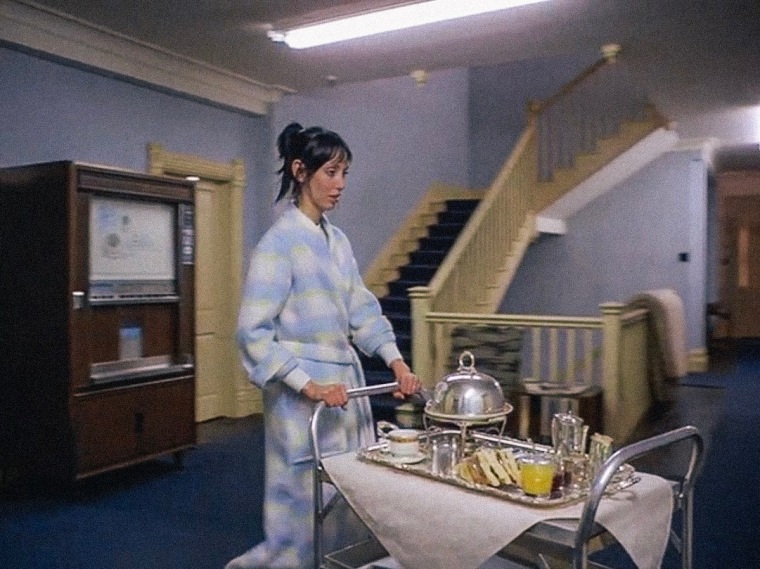 Following Danny’s dish of chocolate ice cream, the subsequent food scene consists of Wendy rolling a room service cart carrying breakfast up to the Torrance’s suite. On the cart is a rather refined spread of orange juice, a filled toast rack, a silver coffee pot, a teacup & saucer, and a silver cloche-covered plate, all on top of an elegant silver serving tray. Once Wendy reaches the Torrance’s suite, she removes the silver serving tray from the cart and carries it into the room where Jack is asleep.

Once Jack is awake, Wendy gives him a plate of fried eggs and bacon telling him, “I made ’em just the way you like ’em, sunny side up.” Jack then takes a piece of bacon and dips it into one of the runny yokes of the fried eggs before consuming.

Additional food or drink scenes worth noting include Wendy opening a giant can of fruit cocktail and emptying it into a large bowl, Jack’s bourbon on the rocks scenes in The Gold Room, Jack’s coffee during “The Interview” with Ullman, and Danny and Wendy watching more Road Runner cartoons with a glass of chocolate milk and a bowl of presumably cereal in front of Danny.

The film’s final food scene begins with Jack asleep on a sack of salt in the pantry room after being locked in by Wendy. As he wakes and the camera zooms out, we see that Jack has been snacking while in confinement as evidence of the opened boxes of crackers and Oreos, and jar of Planters Peanuts by his side, as well as a scattering of peanut shells on the floor.

For my vegan pairing, I opted to recreate Jack’s breakfast of fried eggs and bacon that Wendy lovingly prepares for him. This marked my first attempt preparing vegan fried eggs, and despite making the yokes too small, I’m pretty happy with how they came out.

Of course, just like Wendy, I also included toast, orange juice and coffee to complete the breakfast spread.

Finally, for the tablecloth, I found a fabric inspired by the Overlook’s rather iconic carpet.

Thanks so much for tuning in for the first October post on food & a film! Being that there are five Wednesdays in October, there will be five posts published this month, with all posts featuring films from the horror, or horror-comedy genre. Until next week!

One thought on “The Shining”