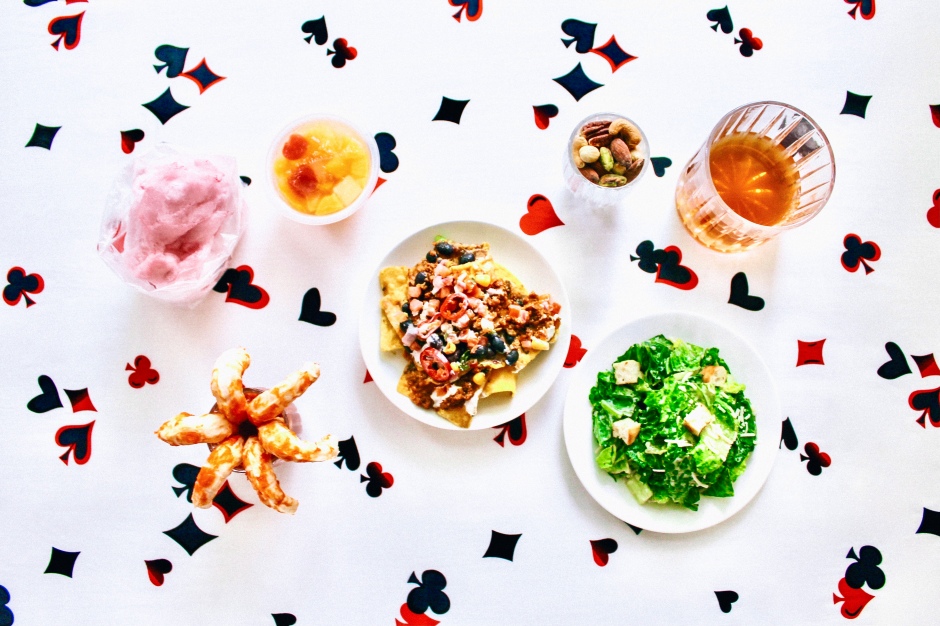 A man, along with his team of ten swindlers, conspire to rob three Las Vegas casinos in one night.

Released in 2001 and directed by Steven Soderbergh, Ocean’s Eleven is a remake of Ocean’s 11, a 1960 film starring the Rat Pack. Typically I am someone who prefers an original film to the remake; however, in this case, I definitely prefer Soderbergh’s version; it is one of those films I can watch time and time again (and have). There is also the fact that Ocean’s Eleven features a multitude of food and drink moments, most of which, as we will see, involve Brad Pitt’s character, Rusty.

The very first food or drink moment in Ocean’s Eleven occurs just under five minutes in when Danny Ocean (George Clooney) is drinking brown liquor in a rocks glass as Frank (Bernie Mac) joins him at the bar. Less than a minute later, we are introduced to Rusty who is eating nachos outside a Los Angeles club where he is teaching celebrities how to play poker. A minute later, during the poker lesson, we see all the celebrity students with blue glass bottles of water (Ramlösa) in front of them, and Rusty with brown liquor in a rocks glass. A minute later, we see Rusty drinking liquor at the bar of the club during a break in his poker class. Later that night, Danny and Rusty head to Musso & Frank Grill where the duo both sip from teacups while seated in a booth.

A couple more minutes into the film, Danny and Rusty are having lunch with Reuben (Elliott Gould) at his home. The trio each have a plate of salad in front of them, and there is also a large serving bowl of salad in the middle of the table. We can also see some pieces of a baguette on a plate, as well as what looks like a cheese plate near Reuben. Danny and Rusty have drinks in yellow tinted glasses so it is hard to make out what they are drinking (possibly lemonade, possibly water), but Rubin is drinking some type of tropical punch with a pineapple and cherry garnish on the rim.

The next scene to feature food occurs about five minutes later when Rusty and Danny are seated at a cafe in Santa Monica. Rusty has an espresso cup & saucer in front of him, as well as some type of food item on another plate, and Danny is holding a coffee cup and saucer.

Following this cafe scene, we then see Rusty drinking a fountain soda at the circus, and then upon leaving the big top, Rusty is eating from a bag of cotton candy while walking with Danny through the parking lot.

Seconds later, we are introduced to Saul (Carl Reiner), who is peeling an orange while at a greyhound race track. Rusty approaches Saul and asks, “What’s with the orange?,” to which Saul replies, “My doctor says I need vitamins.” Seconds later, Rusty and Saul are now seated in a new location at the track, and Rusty is eating some type of frozen fruit cup, while Saul is holding a paper cup containing an undisclosed beverage.

The next food or drink moment occurs back at the bar at Musso & Frank Grill, where Rusty and Danny are both seen with drinks. Then about a minute later, this time at Emmitt’s Pub, we see Danny with another rocks glass with brown liquor.

Following these back to back cocktail moments, the next scene to feature food or drink takes place at Reuben’s when the gang meets for the first time. We watch Reuben bite a tea sandwich, and see some people with drinks, and others pick at the spread, which consists of a substantial buffet table filled with cocktail food including a bunch of skewers with various cheeses and what looks like olives. As the gang attends this cocktail reception of sorts, Danny delivers a short speech: “All right before we get started, nobody’s on the line here yet. What I’m about to propose to you is both highly lucrative and highly dangerous. If that doesn’t seem like your particular brand of vodka, help yourself to as much food as you like, and have a safe journey. No hard feelings. Otherwise, come with me.”

Following the team’s first meeting at Reuben’s, the next time we see food or drink is when Rusty is walking around the hotel room while eating a salad, and in the same scene, Danny is once again drinking from a rocks glass. About 25 seconds later, Rusty is putting something in his mouth again; this time, a lollipop. Then a couple minutes later, Danny is yet again drinking more brown liquor from a rocks glass.

The next major food moment in film takes place during a scene between Rusty and Linus (Matt Damon) where Rusty (no surprise) is eating shrimp cocktail. Minutes later we see Saul drinking from a champagne glass after taking an antacid, and then a minute after that we see Tess (Julia Roberts) drinking a glass of white wine while at a table in the casino restaurant. When Danny then joins Tess at the restaurant, uninvited, what do you think he is drinking? Why, yes, you guessed it! Yet another rocks glass full of brown liquor. Does this man ever drink water?

Several more minutes into the film we see Rusty waiting in the casino lobby and eating a spoonful of what looks like ice cream. Then a few minutes later, we see him in the gang’s hotel room eating nuts. Following the bar mix moment, we then see Virgil (Casey Affleck) and Turk (Scott Caan) with a room service cart enter the hotel room. Virgil asks “Who gets the penne?,” and we then see Livingston (Eddie Jemison) a few moments later, eating his penne. And then wouldn’t you know it, seconds after we see Livingston’s pasta, we see Danny drinking from another rocks glass!

We also have a fun moment of dialogue where Rusty seemingly acknowledges how much he has been eating while on the phone with Terry Benedict (Andy Garcia). When Benedict detects that Rusty is currently in the casino by the slots, Rusty replies, “Of course I’m in the casino. In fact, I’m staying in your hotel. I have two words for you: mini bar.”

And lastly, the very final food moment in Ocean’s Eleven occurs at the beginning of the very last scene in the film with Rusty (could it be anyone else?) eating some type of sandwich or burger (possible a bacon, egg and cheese?) while waiting for Danny. Rusty takes a bite of his food and as he is chewing, he stops and makes a motion with his fist to his chest indicating that he has heartburn.

For my Ocean’s Eleven-inspired menu, I decided to go with a sampling of food and drink items that Rusty not only shares the screen with, but is usually seen consuming. For the savory food items we have a Caesar salad, nachos, shrimp cocktail, and mixed nuts.

Then for dessert, we have cotton candy and a frozen fruit cup, and for a beverage, some brown liquor in a rocks glass.

Finally, for the table setting, I found a fabric with a playing card motif to use as a tablecloth.

And that does it for May’s installment of food & a film! Thank you so much for tuning in, and be sure to check back next month for another new entry!