Upon learning he is a wizard, Harry Potter (Daniel Radcliffe) is enrolled in Hogwarts School of Witchcraft and Wizardry, where he begins to learn all about the magical world, including the truth about his parents and how he received the lightning bolt scar on his forehead.

Released in 2001, Harry Potter and the Sorcerer’s Stone is the film adaptation of the novel of the same name, which is the first in a series of seven books that were each turned into a film, except for the final installment, which was split into two films.

As a fan of the Wizarding World, I knew at some point I needed to feature at least one Harry Potter film on food & a film, especially considering that while the films are delightful on their own, they also contain some incredibly enjoyable — dare I say, magical — food moments. When it came time to decide on which of the eight films to select, it seemed only appropriate to go with the very first; the film that ultimately introduces us to the spellbinding world of witchcraft and wizardry and also contains many bewitching bites. In addition, I wanted to feature this particular film on September 1st since the first of September is the first day of school at Hogwarts.

The very first food moment in Harry Potter and the Sorcerer’s Stone occurs about 5 minutes into the film when Harry first walks into the Dursley’s kitchen at breakfast time. We see a large jug of orange juice on the kitchen table in the foreground, as well as what looks like a fruit bowl on kitchen counter. Aunt Petunia (Fiona Shaw) unpleasantly says to Harry, “Why don’t you just cook the breakfast, and try not to burn anything.” Harry goes to the stove and we shortly thereafter see him unsuccessfully trying to get bacon out of the pan with a spatula. As Harry is attempting to place the bacon on the plates, Uncle Vernon (Richard Griffiths) barks to him, “Hurry up! Bring my coffee, boy!,” so Harry fetches the pitcher of coffee.

Several more minutes into the film is another breakfast scene where we see Aunt Petunia cooking something with tongs on the stove as Harry walks into the kitchen. We again see orange juice in glasses on the table, as well as see that Uncle Vernon is eating a bowl of corn flakes. About a minute later, we get another scene at the Dursley’s home where Harry is offering a plate of cookies to the family in the living room. Dudley (Harry Melling) inhales a cookie as Uncle Vernon takes one from the plate.

The next food moment occurs when the Dursleys flee to a remote ramshackle residence seemingly in the middle of the sea. During this scene are introduced to the ever so endearing Hagrid (Robbie Coltrane) who brings Harry a birthday cake and upon handing it to him says, “Baked it myself. Words and all.” The cake is a charmingly rustic frosted pink confection with green lettering spelling out “HAPPEE BIRTHDAE HARRY” and large crack down the middle. Shortly after this lovely gesture, Dudley sneaks away with Harry’s cake and begins devouring it; however, when Hagrid discovers this cake theft, he punishes Dudley by giving him a pig’s tail.

After Hagrid gifts Harry his birthday cake, the next notable food moment occurs when Hagrid takes Harry to the Leaky Cauldron. When the duo first step foot inside, there appears to be some food on the large table in the center of the pub. Later, in a subsequent scene following their shopping trip at Diagon Alley, the two are back at the Leaky Cauldron, seated at a table and eating what looks like soup.

The following morning, Hagrid drops Harry off at King’s Cross where Harry then boards the Hogwarts Express at Platform 9 3/4. While at the train station, Harry meets Ron Weasley (Rupert Grint) and the two end up sharing a compartment on the train. As the boys talk on the train, a trolley full of sweets stops in front of the door to their compartment and the women pushing the cart asks, “Anything off the trolley, dears?.” Ron holds up a plastic bag filled with a smushed sandwich and says disappointingly, “No, thanks, I’m all set.”; however, Harry pulls out a handful of gold coins from his pocket and replies, “We’ll take the lot!.” We then cut to a shot of Harry and Ron sitting together eating bundles of sweets splayed out between them on the seat. Ron’s rat, Scabbers, is perched on Ron’s knee with a box of Bertie Bott’s Every Flavour Beans over his head. Harry picks up another Bertie Bott’s box and wonders out loud, “Bertie Bott’s Every Flavour Beans?,” to which Ron responds, “They mean every flavor! There’s chocolate and peppermint, and there’s also spinach, liver and tripe. George sweared he got a bogey-flavored one once!” Harry then seemingly disgusted by the taste of the bean he had been chewing, quickly takes it out of his mouth. Harry then picks up a Chocolate Frog box, which has royal purplish blue and gold coloring and a pentagon shape, and asks, “These aren’t real chocolate frogs, are they?.” Ron replies saying, “It’s just a spell. Besides, it’s the cards you want. Each pack’s got a famous witch or wizard. I got about 500 meself.” Harry then opens the package, and a chocolate frog jumps onto the glass of the window, climbs up the window until it reaches the opening, and jumps out of it. After watching the frog’s departure, Ron remarks, “Oh, that’s rotten luck. They’ve only got one good jump in them to begin with.”

Following the train sequence, the next scene to feature food takes place in the Great Hall, which is where the students and faculty eat all of their meals, and therefore, where majority of the food moments take place in the film. As the students are seated at the four incredibly long banquet tables, Professor McGonagall (Maggie Smith), who is seated with the other faculty members at the head table that is perpendicular to the other four tables, asserts to the room, “Your attention, please.” Professor Dumbledore (Richard Harris) then rises from his chair and announces, “Let the feast…begin.” We then cut to an aerial view of the Great Hall as food magically fills the serving plates and bowls covering the table tops, and the hall is immediately filled with awe and chatter.

We then cut to a close up of the Gryffindor table, where we see a large serving tray topped with chicken drumsticks, a serving bowl packed with mini corn on the cobs, and another serving tray with crown roast of lamb. We also can see goblets of pumpkin juice next to each of the students’ individual plates, which are filled with chicken or turkey, as well as mashed potatoes, corn, peas & carrots, and possibly additional vegetables as well. In another shot we see Ron double-fisting drumsticks, taking a few bites of one drumstick before turning his focus to the other. There is then another shot of the feast where we can see a fruit bowl with different colored apples, grapes and plums, as well as a tray of either carrot sticks or French fries (or chips as the Brits would say).

Shortly after this first Great Hall feast on September 1st, we see another elaborate spread, this time for Halloween as evidence of the floating jack-o’-lanterns hovering above the diners. As the camera tracks along the interminable banquet table, we are shown the festive spread of miniature carrot cakes, sticky buns, doughnuts, red apples, and sweets galore, including cauldrons filled with giant lollipops.

Following the Halloween feast, the next major meal moment in the Great Hall occurs during breakfast. The scene opens on Harry twirling what looks like a piece of meat (possibly bacon?) on his fork and shortly thereafter, Harry receives a surprise special delivery: a Nimbus 2000. As Hedwig drops the broomstick onto the dining table, we cut to an overhead shot of Harry, Ron and Hermione (Emma Watson) uncovering the broomstick from its brown paper packaging. During this shot we get a better look at the day’s breakfast as we see the trio’s plates each topped with a proper English Breakfast of bacon, fried egg, sausage, grilled tomato, and likely some buttered toast, fried mushrooms, and baked beans as well to accompany their goblets of orange juice.

The next meal scene in the Great Hall following this breakfast scene is the very final feast of the school year, as well as the final food moment of the film. As with the September 1st feast, this final feast has a very similar spread and we can see at the head table a large honey roasted ham, a rack of lamb, a bountiful fruit bowl and a brimming bowl of fried potatoes.

Lastly, a few additional food moments worth mentioning include Ron enjoying some Bertie Bott’s Every Flavour Beans while Harry opens his Christmas presents; the large bowl of granny smith apples and green grapes on the table as Seamus attempts to turn his goblet of water into rum; Harry waking up to a large collection of cards & sweets in the infirmary; and Dumbledore eating what he hopes is a nice toffee-flavored Bertie Bott’s bean, but sadly discovering upon tasting that the flavor is, alas, earwax. 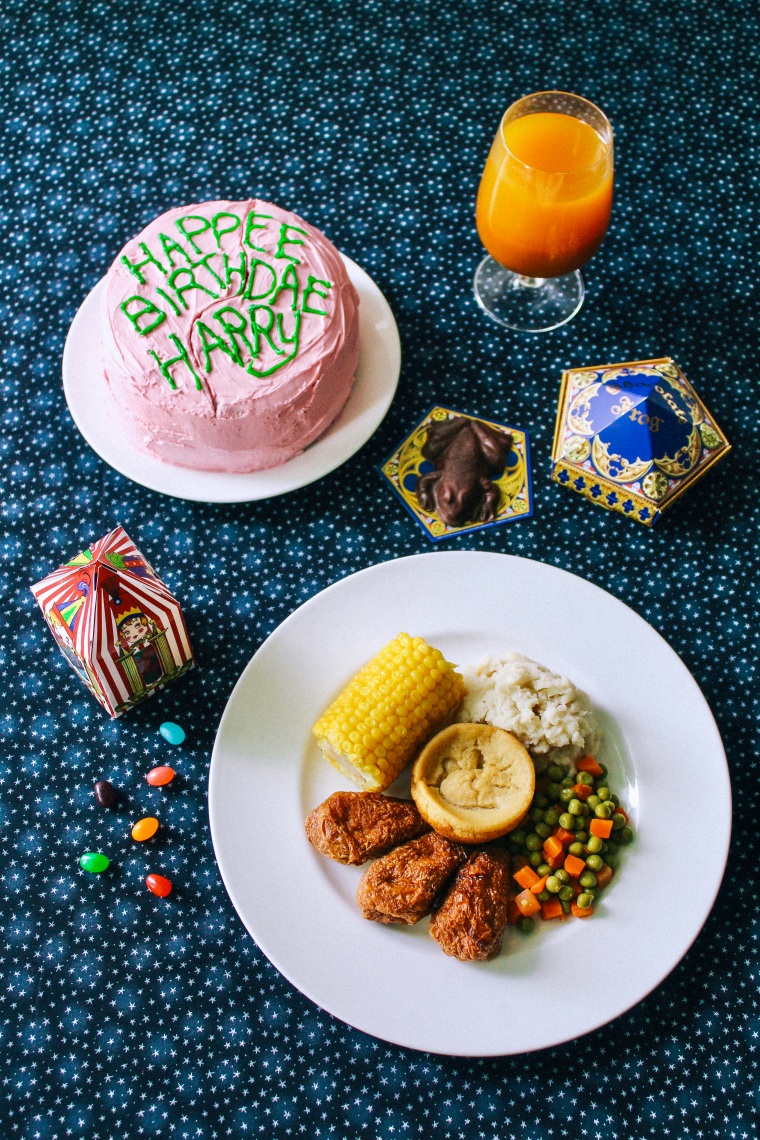 For my Harry Potter and the Sorcerer’s Stone food pairing, I ultimately decided to prepare a vegan version of the September 1st feast in the Great Hall. For my vegan Great Hall Feast menu I included vegan chicken drumsticks, mashed potatoes, a mini cob of corn, peas & carrots, and for good measure, a British Sunday Roast classic: Yorkshire pudding. For my beverage, I went with pumpkin juice, which aside from orange juice is really the only other option from the film (although I should note that it was incredibly tempting to make butterbeer instead; however, the drink is not actually featured until the third film so pumpkin juice was the only way to go!).

Then to round out the meal, I chose to include some dessert elements from other moments in the film to balance out the savory feast. First, I re-created Hagrid’s birthday cake for Harry by baking a chocolate cake, icing it in pink frosting, adorning it with green lettering, and giving it a little crack down the middle to make it a little more screen-accurate. Additionally, since no Harry Potter-themed menu would be complete without some sweets, I naturally had to include a box of Bertie Bott’s Every Flavour Beans, as well as a Chocolate Frog; however, I had to do a bit of extra work since neither are naturally vegan. For the Chocolate Frog, I ended up using this kit, and for the Bertie Bott’s, since most jelly beans contain gelatin, beeswax, and/or confectioner’s glaze, I tracked down some Jolly Rancher jelly beans and used a template I found on Etsy to make the box.

Lastly, for the table setting, I found a stellar star-patterned fabric (that is black, but reads a bit more navy in photos) to use as a tablecloth.

Thank you for tuning in for September’s installment of food & a film! Be sure to check back next month for a new entry for the month of October. Until then!

One thought on “Harry Potter and the Sorcerer’s Stone”