A curious girl falls down a rabbit hole, entering a whimsical world of wonder. Released in 1951, Alice in Wonderland is Disney’s hand drawn animated take on Lewis Carroll’s cherished fantastical tale. In addition to being one of my favorite Disney classics, Alice in Wonderland contains quite a number of food and drink moments, making it an obvious choice for a food & a film feature.

The very first food or drink moment in Alice in Wonderland occurs about eight minutes into the film when Alices encounters a small glass bottle with a tag tied around the neck, adorned with the words “DRINK ME.” Alice complies and after taking a sip from the bottle, exclaims, “Mmmm. Tastes like cherry tart.” She proceeds to take another sip from the bottle, and as Alice begins to shrink down in size, she continues to describe the taste of the liquid as tasting like, “custard, pineapple, roast turkey.”

After shrinking down to a minuscule size, Alice is then presented with a small lidded gold box filled with cookies that are embellished with the phrases “EAT ME” and “TAKE ME.” Alice again complies, taking a bite out of an “EAT ME” cookie before growing in size.

We then see a version of these same cookies again a little while later when Alice is at the home of the White Rabbit. Alice happens upon a lidded silver compote bowl (adorned with a carrot design), which contains a collection of colorful sugar cookies each with its own phrase: EAT ME, TRY ME, TAKE ONE. Taking an EAT ME cookie, Alice says, “Thank you. Don’t mind if I do.,” and after taking a bite, proceeds to grow in size like before. 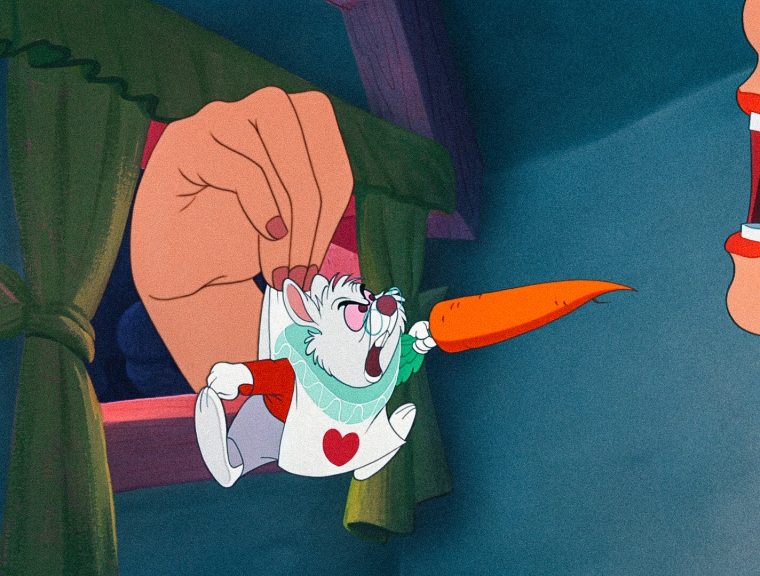 Panicked by her new gigantic dimensions, Alice spots a garden out in front of the house and wonders out loud, “Perhaps if I eat something, it will make me grow small.” Alice then attempts to pluck a carrot from the garden; however, the White Rabbit tries to prevent her from doing so by grabbing onto the top of the carrot. Then instead of picking the carrot, Alice picks up the White Rabbit who is still attached to the carrot, thus taking the whole carrot with him. As Alice lifts the White Rabbit into the air towards her she says to him, “I’m sorry, but I must eat something.,” and proceeds to take a bite of the carrot, which causes her to shrink down back into a minuscule state.

I should also note that between these two separate cookie sequences is Tweedle Dee & Tweedle Dum’s story: “The Walrus and the Carpenter” or “The Story of the Curious Oysters,” which is a rather disturbing sequence and as Alice says, “a very sad story.” The villainous Walrus and Carpenter discover a school of innocent, gullible oysters and persuade them to join them at a ramshackle “fish dinners” restaurant (built quite hastily by the Carpenter) where they plan to have an oyster feast. When the carpenter retreats to the kitchen to retrieve a loaf of bread to accompany their fresh seafood meal, the Walrus reveals the restaurant’s menu to the baby oysters, which announces the daily special— ‘OYSTERS on the half shell’. As the Carpenter returns from the kitchen after slicing the loaf of bread and making a sauce “of peppercorns and mustard seed and other seasonings,” he discovers that the Walrus has already eaten all of the oysters as evident from the upsetting pile of empty oyster shells on the table. A very sad story, indeed.

The next notable food sighting is when Alice spots the Bread-and-Butterflies, which is shortly before she meets the Caterpillar who is perched on top of a mushroom. Upon metamorphosing into a butterfly, the Caterpillar tells her that one side of the mushroom will make her grow taller, and one side shorter. Alice takes a piece from each side of the mushroom and proceeds to take a bite of one, which causes her to grow to the size of a tree. Upon her ascension, Alice disrupts a bird nest containing eggs, which ends up on the top of her head. The mother bird, furious and terrified, accuses Alice of being a serpent, and when Alice denies the accusation, the bird says, “And I don’t suppose you eat eggs either.” Alice replies, “Yes, I do.,” which does not go over well with the bird; however, Alice then takes another bite of mushroom and shrinks back down to her miniature size. This time instead of taking a whole bite, Alice gives the piece of mushroom a single lick, which results in her growing back to her standard size.

After the mushroom incident, the next food encounter comes when Alice happens upon a tea party, complete with whistling tea pots, and hosted by the Mad Hatter and the March Hare, with the Dormouse in attendance. The Mad Hatter and March Hare are singing and drinking tea, and upon greeting Alice, pour her a cup of tea, which is the first of multiple cups they pour her; however, she is never able to actually drink any of it. The Mad Hatter and March Hare then after discovering that it is Alice’s Unbirthday, present her with a pink frosted cake topped with a sizable, sparkly candle. The Mad Hatter then tastes a fingerful of frosting before the cake rockets up into the sky. After the party attendees have returned to their chairs, the Mad Hatter repeatedly dunks his saucer into his cup before taking a bite of it as if it were a biscuit. In addition to the massive amount of tea and the Unbirthday cake, additional food and drink items appearing at the tea party include a bowl of sugar, a jar of jam, a shaker of salt, a dish of butter, a crock of mustard, and a wedge of lemon.

Lastly, the film’s final food moments include the Queen of Hearts tasting her Unbirthday cake, jam accidentally being thrown at the Queen of Heart’s face, the Mad Hatter and March Hare insisting on Alice having a cup of tea before pulling her into a large teacup bath, and Alice’s sister telling Alice, “Oh well. Come along. It’s time for tea.”

For my vegan food pairing for Alice in Wonderland I felt there was really no choice, but to create an afternoon tea service, inspired by the Mad Tea Party. For my afternoon tea, I opted to have several savory components, in addition to an assortment of sweet components. For my savory options, I went with the forever classic cream cheese & cucumber tea sandwich, as well as mushroom tartlets and carrots with hummus (the latter two inspired by the vegetables featured in the film).

Then for the sweet options, I prepared blueberry cream cheese tartlets, miniature vanilla cakes with a grapefruit glaze, and strawberries that I cut to look like roses. Of course, I also had to include some EAT ME sugar cookies with royal icing, and since it’s a tea service, I also brewed up some cherry blossom tea.

Finally for the table setting, inspired by the song “Painting the Roses Red,” I found a rose print fabric to use as a tablecloth. I also included a small blue glass bottle complete with DRINK ME tag as it appears in the film, as well as threw a small floral arrangement together containing a bunch of different flowers as a nod to the song “Golden Afternoon.” 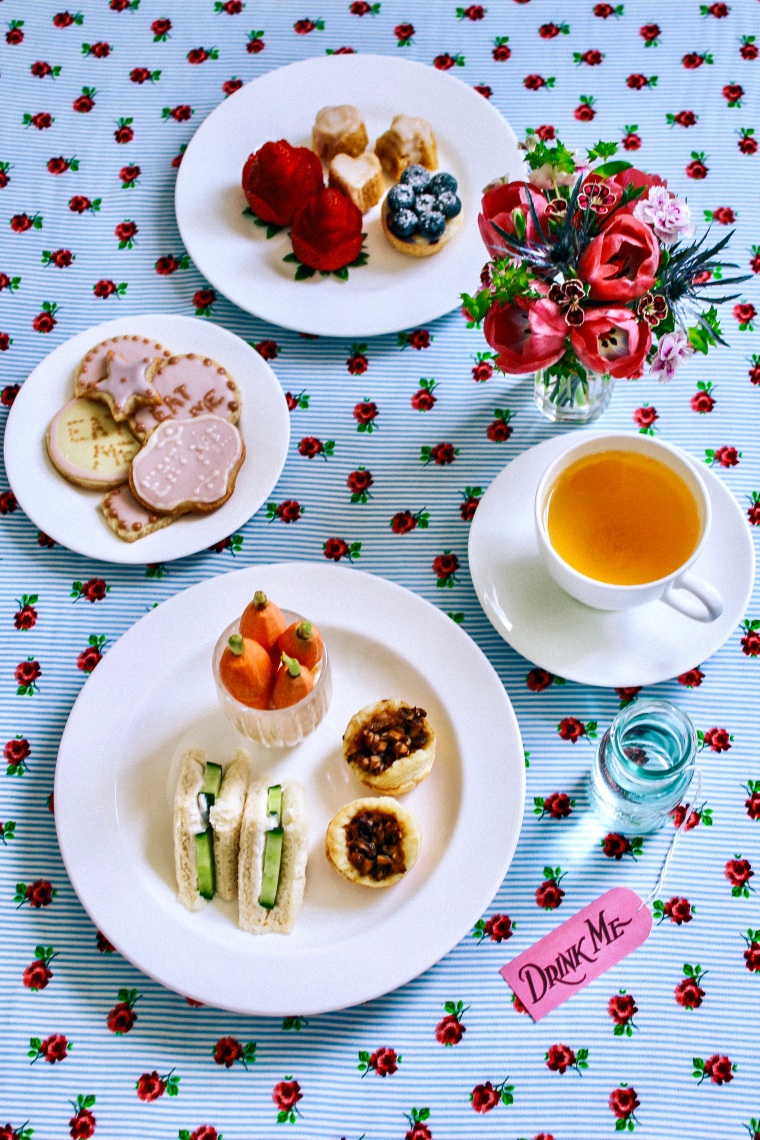 And that does it for June’s installment of food & a film! If like me, you are a fan of Disney hand drawn animated films, be sure to check out past entries beginning with Lady and the Tramp, as well as Snow White and the Seven Dwarfs, and most recently, One Hundred and One Dalmatians. Thank you so much for reading. Until July!

5 thoughts on “Alice in Wonderland”