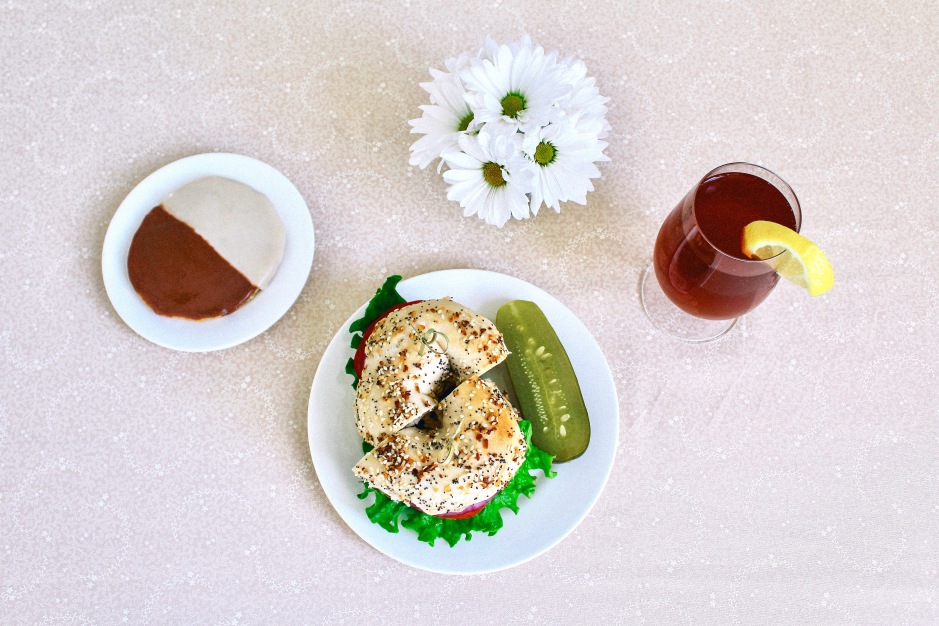 Released in 1998, You’ve Got Mail is a film dripping in charm, as well as contains many delightful food moments, making it an excellent choice for a food & a film post & pairing. Furthermore, the film, which spans the better part of a year, has a fantastic scene set in Zabar’s, which references Thanksgiving, and seeing as tomorrow is Thanksgiving, I thought it was a particularly fitting time to feature You’ve Got Mail on the blog. 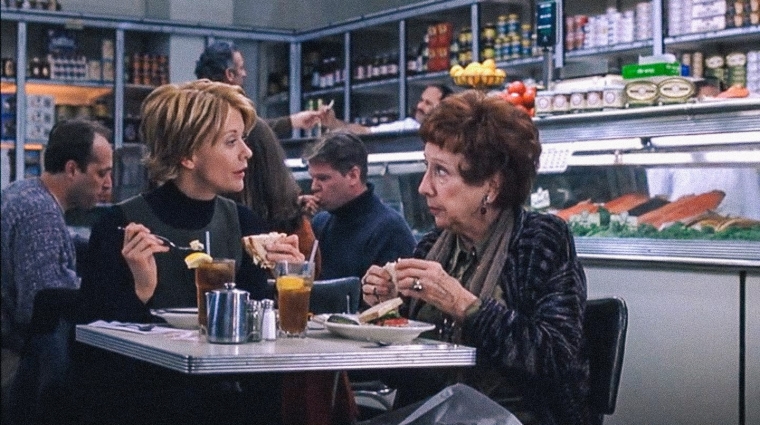 The film’s first major food moment occurs roughly 18 minutes into the film when Kathleen and Birdie (Jean Stapleton) are having lunch at Barney Greengrass. The duo are eating sandwiches and there are a couple glasses of what appears to be iced tea with lemon wedges on the table as well. The scene then ends with Birdie biting into her sandwich, and we then cut to Kathleen in her kitchen unpacking groceries while talking to Frank (Greg Kinnear). 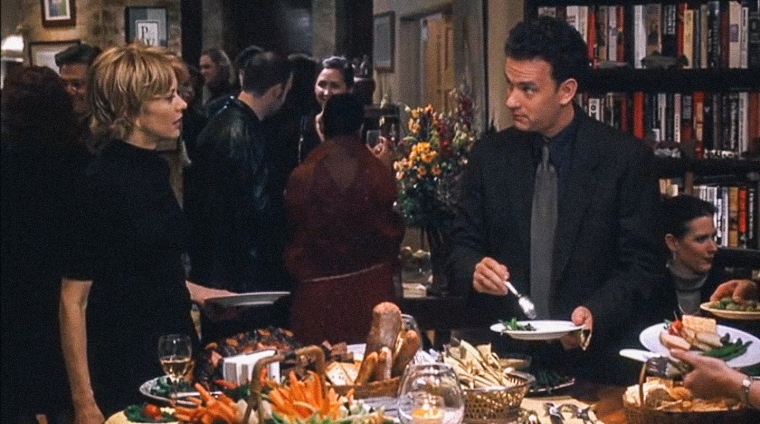 Following the quick appearance of groceries in Kathleen’s kitchen, the next notable food scene is quite brief, and consists of a couple of shots of Joe with Annabelle and Matt at the street fair. Annabelle and Matt are both holding cones topped with giant fluffs of cotton candy larger than their heads, while Joe holds a plate of what looks like fried dough. After the fleeting food moment during street fair sequence, the next food moment  occurs during the cocktail party where Kathleen and Joe converse by a beautiful buffet of food. While the pair make their way around the table, Joe, who has been sampling from each serving plate, begins to scrape the caviar garnish off of a large plate of egg salad and spoons it onto his plate, much to Kathleen’s dismay. 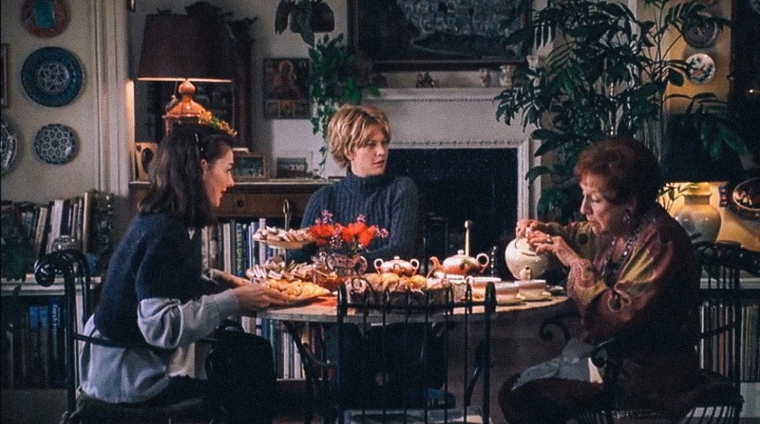 After the caviar garnish moment, the next scene to feature food occurs when Kathleen tries to avoid Joe upon spotting him during a Thanksgiving shopping trip at Zabar’s. Shortly thereafter is the scene at Cafe Lalo, where Joe happens upon Kathleen who has been drinking tea while anxiously awaiting her date’s arrival. After Joe enters the cafe, he walks past a large pastry window before taking a seat at Kathleen’s table and ordering a “mochaccino, decaf, nonfat.” Following this scene in the cafe, the next scene to feature food take’s place in Birdie’s apartment, where Kathleen and Christina (Heather Burns) join Birdie for afternoon tea. The scene begins with Birdie remarking, “Thank you for the scones— they look lovely.,” before encouraging Kathleen to have a tea sandwich, who takes one before passing the two-tiered stand to Christina. 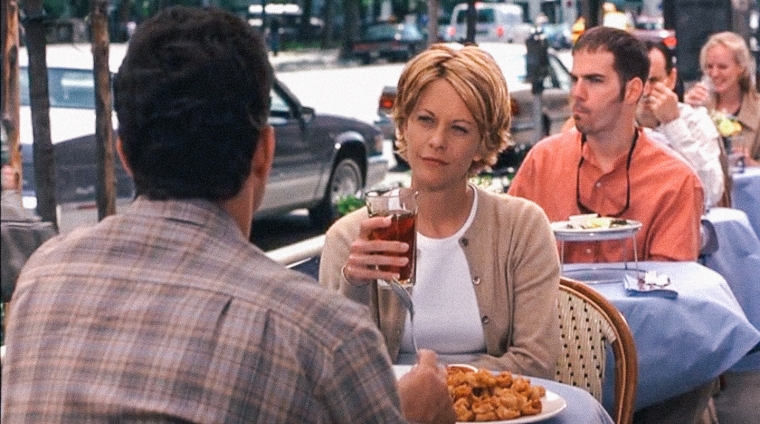 Following afternoon tea at Birdie’s the next scene to prominently feature food is when Kathleen and Joe are having lunch at Ocean Grill. As Kathleen sips her large iced tea we see that Joe and Kathleen are sharing a massive plate of fried calamari. 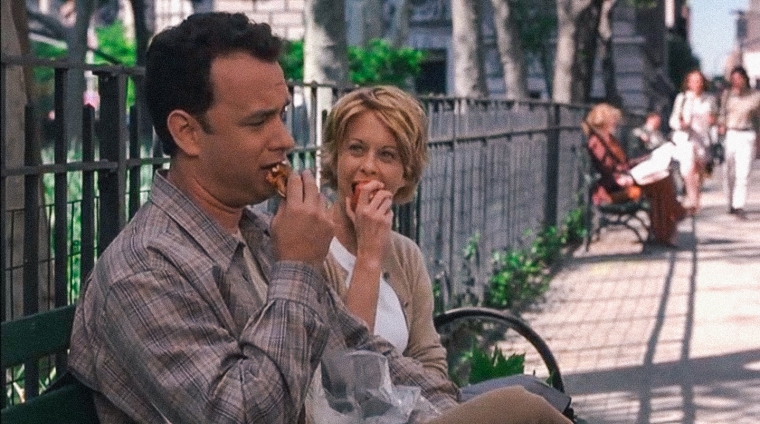 After their lunch, the duo head to a farmers market and stroll around for a while before taking a seat on a park bench to enjoy their newly purchased snacks— a pretzel for Joe and an apple for Kathleen (how New York!). The last scene to feature food then occurs when the two meet up again for another lunch date, this time for hot dogs at Gray’s Papaya.

Other notable food or drink moments worth mentioning include Frank suggesting sushi for dinner and Kathleen excitedly agreeing; Joe writing to Kathleen that Brinkley “likes to eat bits of pizza and bagel off the sidewalk” whereas he “prefer[s] to buy them”; Joe pouring himself a glass of orange juice in the morning before making Patricia (Parker Posey) a double espresso; Kathleen refilling her shop’s candy jar; Joe’s father making himself a cup of tea at his desk; Joe walking Brinkley by his neighborhood H&H Bagels while wondering why the white dust from the flour delivery never seems to land; Joe taking a large sip of Heineken while trying to get through Pride and Prejudice; after dinner drinks during Annabelle’s Annie performance; Frank eating a piece of pie during a holiday piano-side sing-a-long; George (Steve Zahn) wondering out loud what type of meat he will use for his meat sauce; Kathleen and Frank breaking up in a restaurant; Kathleen curling up in a corner of her apartment with a bowl of soup; Joe mixing cocktails while his father snacks on mixed nuts; and finally, the many, many scenes involving coffee, majority of which take place at Starbucks. For my culinary pairing for You’ve Got Mail, I decided to use Kathleen and Birdie’s lunch at Barney Greengrass as inspiration and made a sandwich of vegan tunafish salad with lettuce, tomato and red onion on an everything bagel. I then included a pickle, of course, as well as an iced tea complete with lemon wedge. 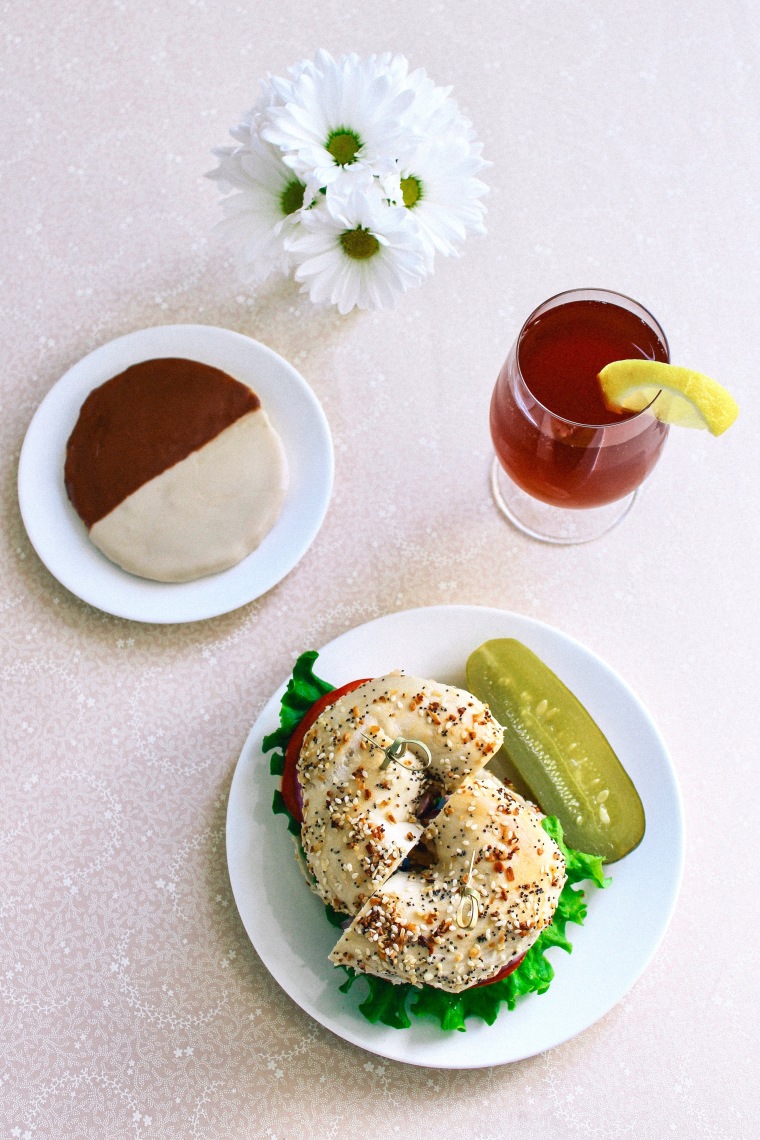 I could have left the menu there; however, since the film is a love letter to New York, and I love a sweet treat, I felt like it was absolutely essential to add a vegan black & white cookie, which was one of the most delicious ones I have ever had. 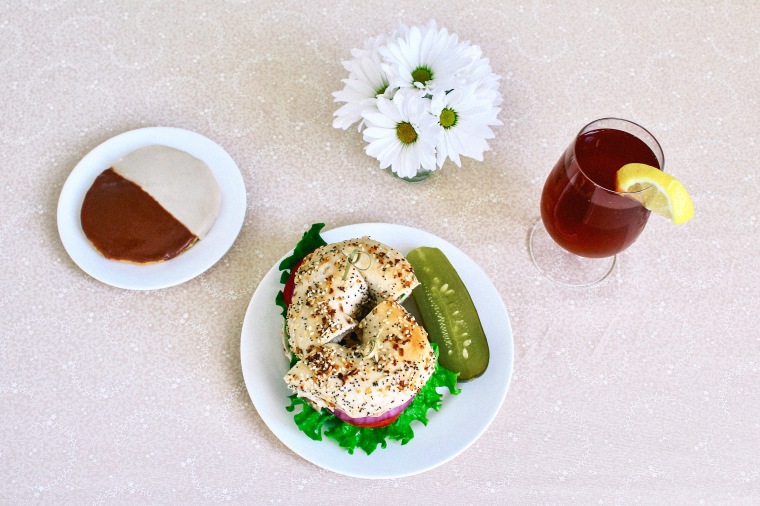 And lastly, for the table setting, I included a small vase of daisies (Kathleen’s favorite), as well as found a fabric that looked like it easily could have been somewhere in Kathleen’s apartment to use as a tablecloth. Thank you so much for reading this week’s food & a film entry, which marks the fourth and final November post. If you are interested in getting a preview of the four films that have been selected for the month of December, make sure to check Instagram Stories on Friday. Thank you again, and Happy Thanksgiving!

One thought on “You’ve Got Mail”