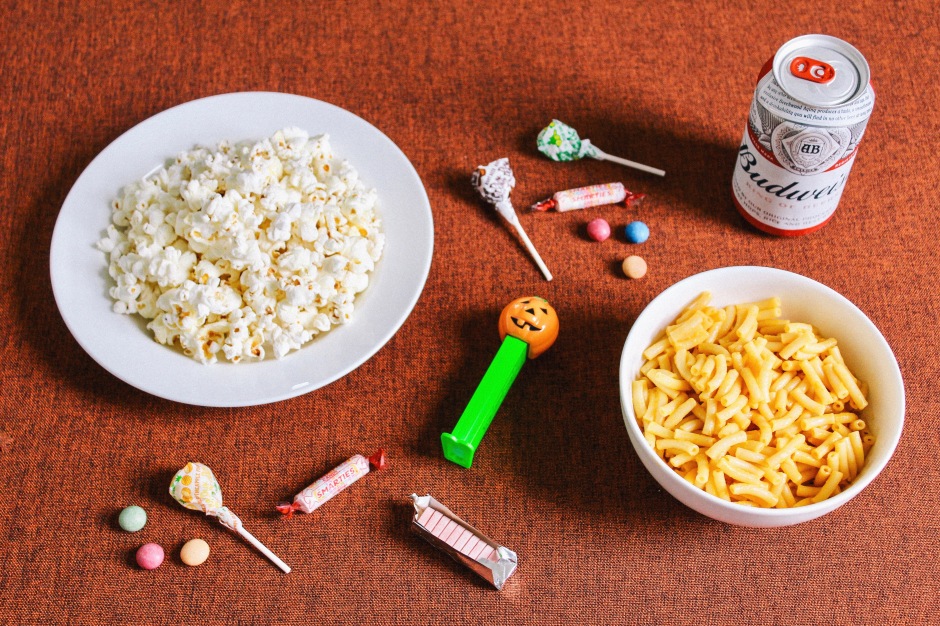 Following his escape from a psychiatric hospital, Michael Myers returns to his hometown of Haddonfield, Illinois, where he murdered his sister exactly fifteen years prior on Halloween night. Directed by John Carpenter and released in 1978, Halloween follows the now-iconic masked killer as he resumes his homicidal behavior and sets his slaughterous sights on a couple of babysitters.

While there are not a lot of food or drink moments in the film (very few actually), Halloween is an absolute horror classic, and seeing as tomorrow is Halloween, I cannot think of a more appropriate film to feature for this week’s food & a film pairing.

The first appearance of food onscreen comes about 40 minutes into the film when Annie (Nancy Kyes) is making popcorn while babysitting Lindsey (Kyle Richards). She calls Laurie (Jamie Lee Curtis) and tells her what she’s up to before she gets melted butter on herself and is forced to wear a men’s button down shirt while she washes her clothes.

Then as Annie returns to the kitchen from the washing machine, we see a Jolly Time Popcorn can on the counter next to the ringing phone, along with a handful of kernels scattered about.

Annie then brings Lindsey and the giant bowl of popcorn over to the house where Laurie is babysitting Tommy (Brian Andrews). Before departing the house to meet up with her boyfriend, Annie talks to Laurie while snacking on a handful of popcorn and pops one of the flakes into Laurie’s mouth.

In addition to popcorn, the other onscreen food or drink moment comes when Lynda (P.J. Soles) and Bob (John Michael Graham) are in Bob’s van drinking cans of beer, which appear to be cans of Budweiser.

While these few moments mentioned above are the only onscreen appearances of food or drink, there are a couple of mentions or suggestions of food in the dialogue. First, when Laurie gets a phone call early on in the film, Annie is chewing on the other end of the line. When Laurie hangs up thinking it is an obscene phone call, Annie calls back saying, “I had my mouth full, couldn’t you hear me?” Annie then tells Laurie that later that night she plans on “making popcorn and watching Doctor Dementia. Six straight hours of horror movies. Little Lindsey Wallace won’t know what hit her.” Later in the film when Laurie is with Tommy and Lindsey, she asks them what they want to do. Lindsey responds by saying, “let’s make more popcorn,” to which Laurie replies, “you’ve had enough.”

When it came time to plan out my Halloween-inspired menu, I knew I had to include popcorn since it was featured so heavily in the film, appearing both in dialogue and onscreen in multiple scenes. I also knew I had to include a can of Budweiser beer since it is really the only other food or drink moment onscreen aside from the popcorn. 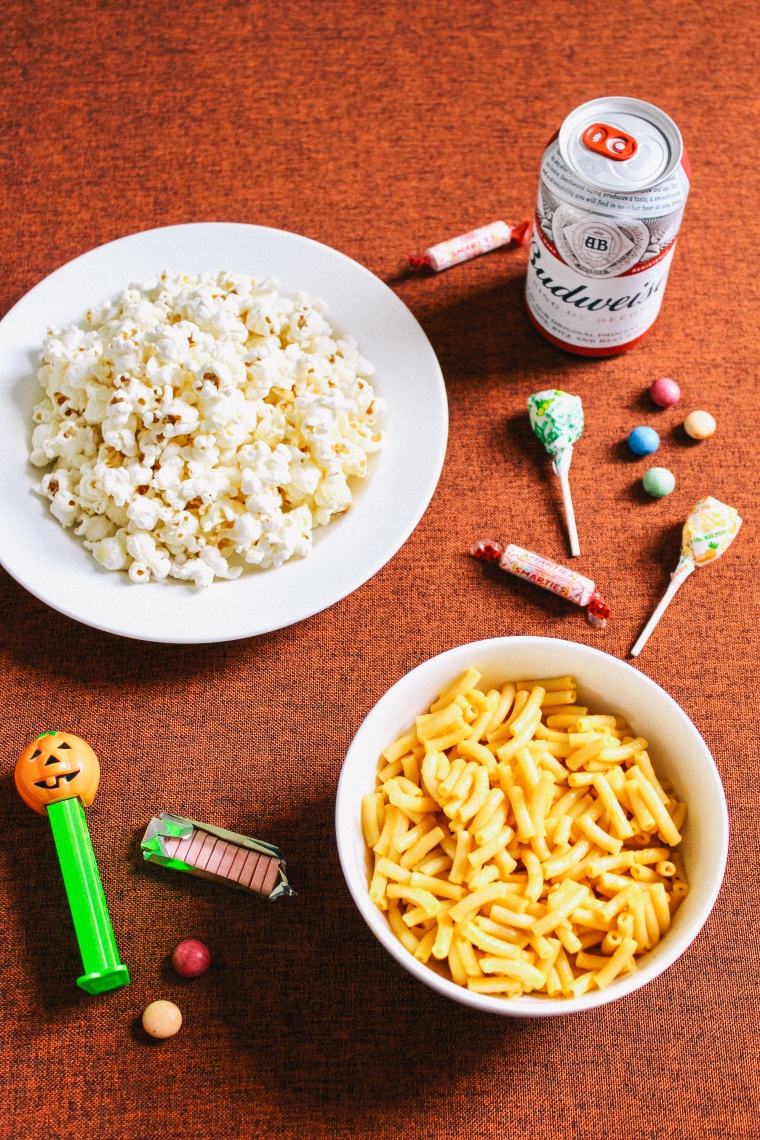 I contemplated whether or not to just have popcorn & beer as my pairing, but in the end I felt like there needed to be another food component that was more of a main dish. However, since Halloween has a babysitter as the protagonist, I thought that the dish should be something that a babysitter would make for themselves and/or the kids that they are watching. Ultimately I felt like boxed macaroni & cheese was the perfect choice since it is simple, easy, fun, and totally something a babysitter would make while on the job in 1978.

To finish out my vegan pairing, seeing as the film features trick-or-treaters, I felt it only fitting to include an assortment of vintage candy from 1978 including Smarties, Pez, Dum Dums and some (vegan) M&Ms. And finally, I found a fabric that reminded me of the couch in the house where Laurie is babysitting to use as a tablecloth.

And that does it for the fifth and final October horror pairing here on food & a film! Thanks for reading and Happy Halloween!

One thought on “Halloween”