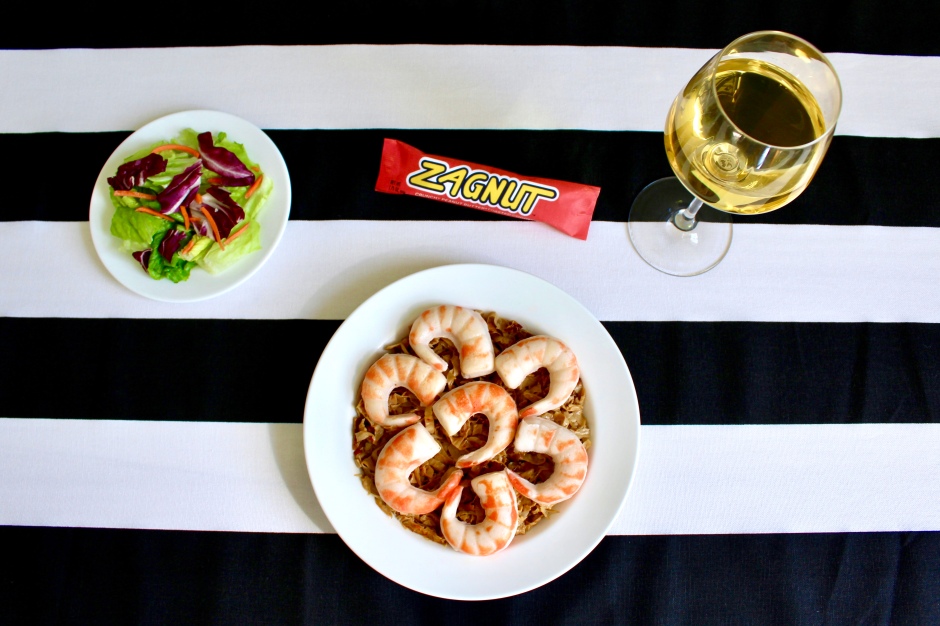 Tormented by a family that has moved into their home, recently deceased married couple Adam (Alec Baldwin) and Barbara (Geena Davis) contemplate hiring a pernicious character named Betelgeuse (Michael Keaton) to help them drive the family out. Released in 1988, Beetlejuice is easily one of my favorite Tim Burton films and considering it contains a rather memorable dinner scene, is an optimal choice for a food & a film pairing.

The first time we see food onscreen is about twenty minutes into the film when Delia (Catherine O’Hara), Charles (Jeffrey Jones), and Lydia (Winona Ryder) are seated around a dining table with Chinese take-out boxes. Delia takes a bite of food, before removing that very bite from her mouth a second later with her chopsticks before complaining, “I can’t believe we’re eating Cantonese. Is there no Sichuan up here?.” Lydia then says, “Plan to have a stroke from the amount of MSG that’s in this food.” to which Delia replies, “This is our first meal in this house so why don’t we all do our little private parts to make it a pleasant one?.” 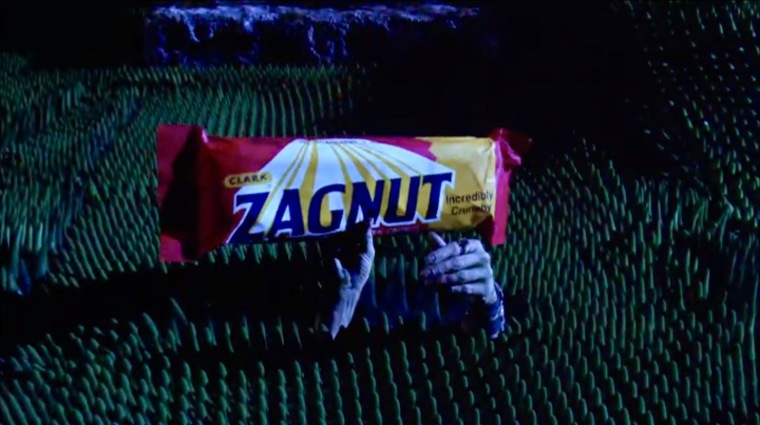 The next food moment comes almost twenty minutes later when Betelgeuse uses a Zagnut candy bar as bait to lure a fly over to him before dragging it down beneath the model town’s faux grass.

Several minutes further into the film, Delia is in the kitchen talking with Lydia as she is chopping up an onion with an assortment of vegetables surrounding the cutting board. After she finishes chopping, Delia moves to the stove where the is a pot that she pours a splash of something (presumable oil or vinegar) into while informing Lydia that she is, “giving a dinner party tonight for seven people.” Delia then moves to the fridge where she takes out what looks like a potato, and picks up a grater to continue her dinner prep. 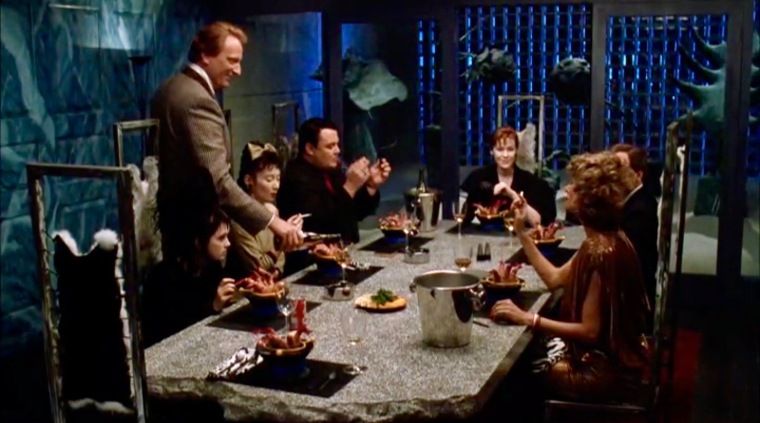 The following food scene is Delia’s dinner party, which is arguably one of the most iconic cinematic dinner scenes of all time. On the table we can see each guest has a bowl of shrimp cocktail in front of them, with all of the adults having a glass of white wine, and Lydia, a can of Coca-Cola. After Charles pours everyone a fresh glass of wine and before anyone begins eating, Delia unexpectedly opens her mouth to sing, but instead of her voice, we hear the voice of Harry Belafonte singing the Banana Boat Song (Day-O). After Delia begins singing, both Delia and Charles uncontrollably get up off their chairs and begin to dance, with the other adults joining them soon after, clearly not in control of their bodies’ movements. 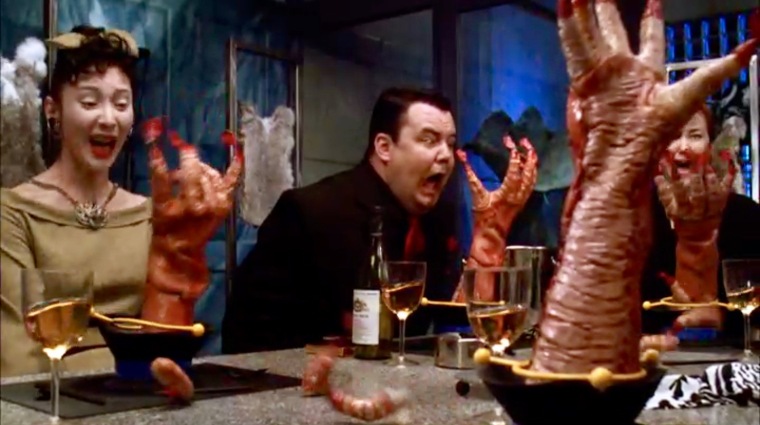 After a bit of dancing and singing about the dining table, the adults then sit back down in their chairs and it is at this moment that their shrimp cocktails come to life. The exaggerated prawns reveal themselves to be the fingers of large hands attached to arms protruding from the once ice-filled bowls. The shrimp fingers then attach to the dinner guests’ faces, pulling them down toward the bowls before pushing them back in their chairs causing them to topple back onto the floor.

Other food and drink moments while not as substantial as this dinner scene, are still worth mentioning include: Charles telling Delia, “And look at that kitchen. You’re finally gonna be able to cook a decent meal.”; Charles making himself a cup of tea in the kitchen before one of Delia’s sculptures comes crashing through the window; Betelgeuse inviting Adam and Barbara up to his place saying, “I’ll fix you something to eat. Hope you like Italian.”; Delia, Charles and Otho drinking water with lemon slices; and finally, Betelgeuse giving Lydia a visual aid of Minute Maid orange juice during a game of charges in an effort to get her to same his name.

Ultimately when it came to decide on my vegan culinary pairing for Beetlejuice, I knew I had to go with a shrimp dish. While it is quite easy nowadays to find vegan versions of pretty much anything, the options for vegan shrimp are pretty sparse to say the least. Thankfully, my favorite vegetarian market, where I previously acquired vegan lobster, carries vegan spot prawns and they ship to anywhere in the USA!

To accompany my vegan shrimp, I found these incredibly tasty noodles, which complemented the faux crustaceans rather nicely. Also, if the massive assortment of greenery on the kitchen counter during the dinner party preparation is any indication, Delia undoubtedly served vegetables at some point in the evening. Therefore, I felt it necessary to include a small side salad to go with the shrimp dish. 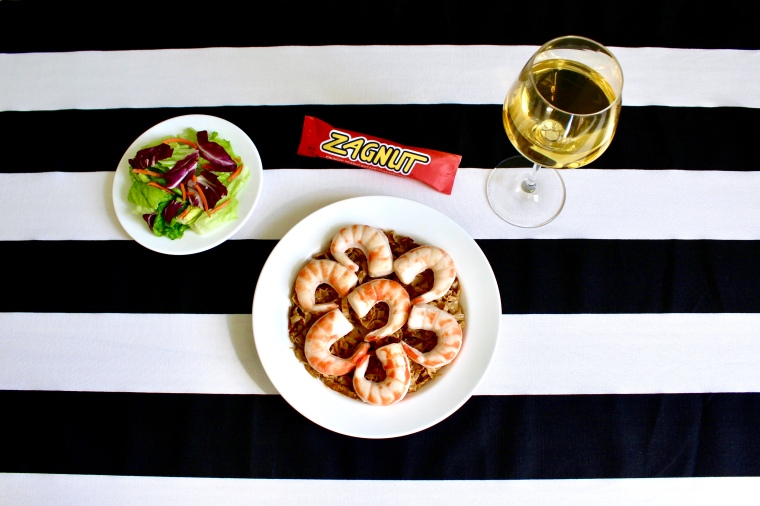 Additionally, for a beverage, I went with the dinner party drink of choice: white wine. Finally, for the table setting, I made my own Zagnut candy bar wrapper as a nod to Betelgeuse’s fly bait, and for the tablecloth, chose a fabric reminiscent of Betelgeuse’s legendary striped suit. 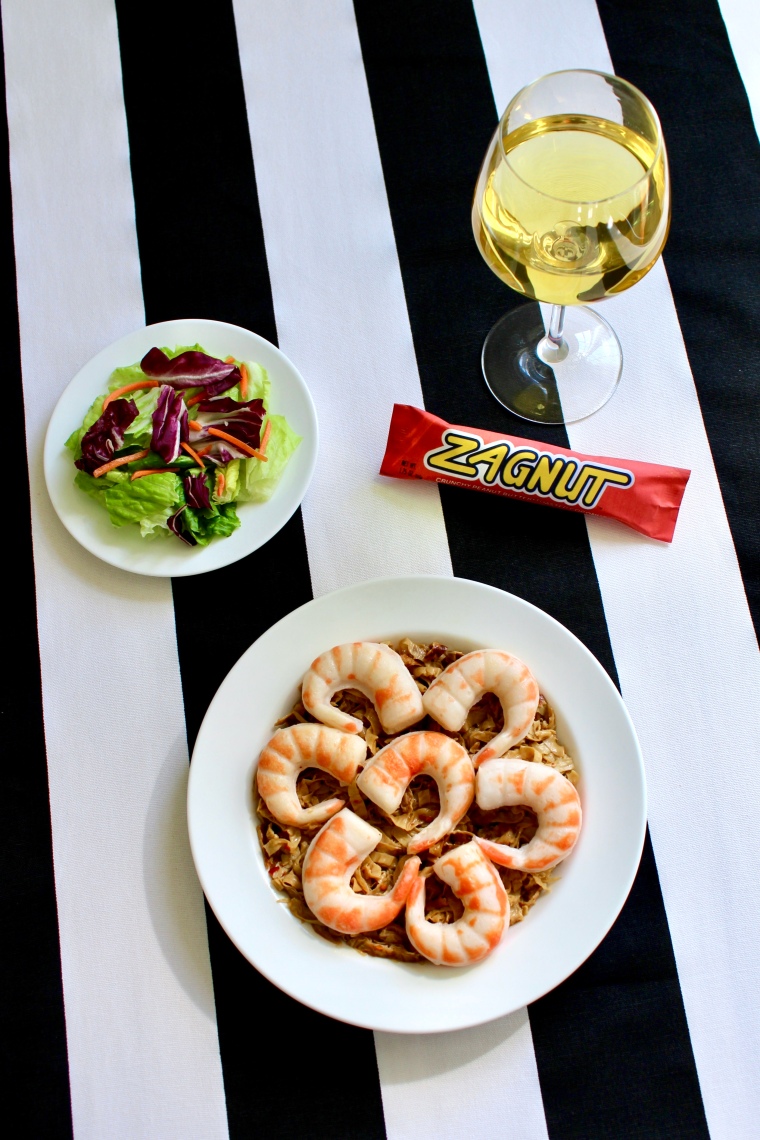 Thank you so much for reading! Make sure to check back next week for another horror classic, which will be the fifth and final October installment here on food & a film. Until then!

One thought on “Beetlejuice”