In honor of back-to school season, I thought it would be quite apt to feature the iconic teen comedy, Clueless (1995) for this week’s pairing. While this film is exceptional on its own, it also happens to be filled with food moments aplenty, making it an ideal selection for food & a film.In this 90s classic, Cher Horowitz (Alicia Silverstone), a Beverly Hills high school student, navigates the highs and lows of adolescence.

The film’s very first food moment occurs immediately in the opening montage. We see Cher with her friends enjoying an ice cream float followed by a close up of a cherry (from said ice cream float) being dangled in front of the server for him to de-stem with his mouth. 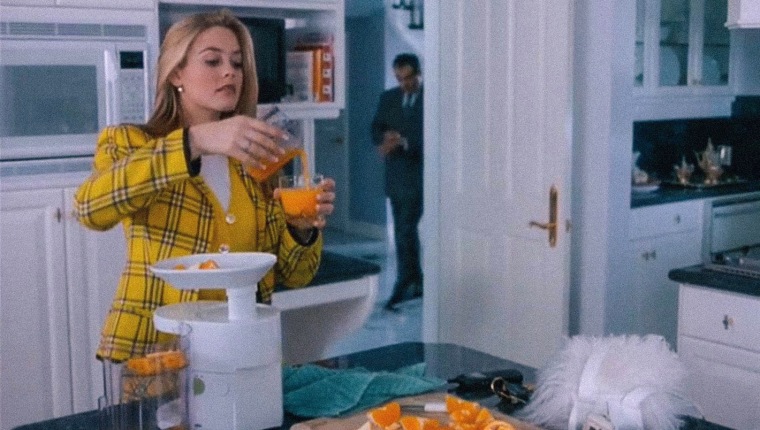 Following the montage, the film’s first scene begins with Cher’s father (Dan Hedaya) making his way down to the kitchen where he finds his daughter making him orange juice, freshly squeezed, telling him, “you need your Vitamin C.”

Later in the morning when Cher is in debate class, she takes out her gum and holds it on the tip of her pointer finger when she gets up to the podium, and then proceeds to put it back in her mouth, quite theatrically, upon finishing her argument.

Following an outfit change after arriving home from school, Cher snacks on carrot sticks before sitting down for a family dinner with her father and her stepbrother, Josh (Paul Rudd). This is the first of two dinner scenes in the Horowitz’s dining room, and for this first dinner, we know their meal includes a side of asparagus since Cher snacks on a single stalk before the trio ever lift their forks.

The next scene to feature food takes place during lunchtime in the faculty lounge. As the camera tracks around the room, we see the teachers’ lunches consisting of items such as sandwiches, pasta salad, muffins, juice boxes, milk, Diet Coke, and a Snickers bar to which Cher’s voiceover narration exclaims, “Ooh, Snickers!.” 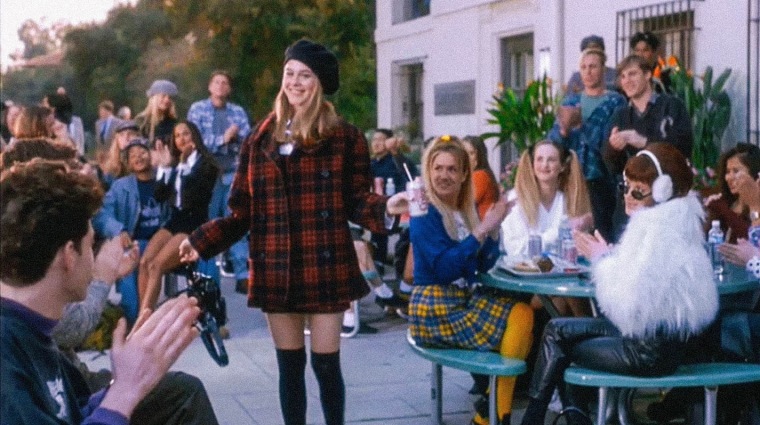 In addition to this scene of the teachers lunching, there are several student lunchtime scenes taking place both inside the cafeteria, as well as at the outdoor dining quad. During these lunch scenes we see more juice boxes, yogurts, Lay’s Classic Potato Chips, Doritos, Snackwell’s Devil’s Food Cookie Cakes, and countless cans of Diet Coke. There are also multiple scenes featuring Starbucks coffee cups. 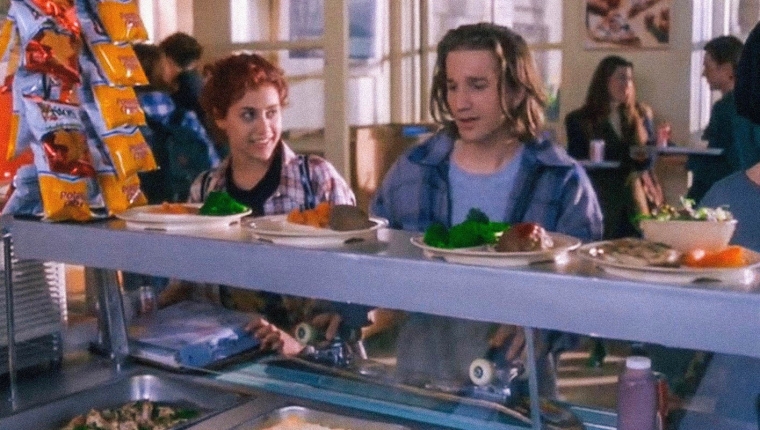 Food is constantly peppered throughout this film not only on-screen, but in the dialogue as well. In a scene between Cher and Dionne (Stacey Dash), Cher exclaims, “I feel like such a heifer. I had two bowls of Special K, 3 pieces of turkey bacon, a handful of popcorn, 5 peanut butter M&M’s and like 3 pieces of licorice.” Cher also at different points in the film references lemon Snapple, Carefree gum, cappuccinos and mochachinos, as well as suggests that she, Dionne and Tai (Brittany Murphy) have a “calorie fest” before seeing “the new Christian Slater.”

Other notable food moments include Cher picking a lemon from a tree outside her father’s office and squeezing it into his tea, beer & chips at the Valley party, the throwing of breadsticks during the “calorie fest,” Cher sending chocolates to herself in class, Dionne and Murray sharing a sandwich, and Cher showing Dionne how you can lose weight by cutting your food vigorously. I would also be remiss to not mention the moment when Cher puts an uncut log of cookie dough on a baking sheet while her voiceover narration states, “whenever a boy comes, you should have something baking,” before inevitably forgetting about it in the oven.

Finally, it is worth pointing out that Josh in particular is a character who eats quite a bit throughout the film. There is a scene where he makes a very simple sandwich with bread, mayo, and turkey deli meat, as well as scenes where he eats pickles from the jar, cereal from the box, Cheez Doodles from a large bowl, and lastly, a forkful of wedding cake in the film’s final scene.

Needless to say, Clueless contains endless amounts of inspiration for a culinary homage, and so I ultimately chose a few food moments from the film for my vegan pairing.

First, I chose to go with lunch since it is the meal most heavily featured in the film, and for the main component, decided on a sandwich; a classic school lunch standby that appears several times throughout in the film.

Then for my main source of inspiration, I selected Cher’s quote listing the various things she had eaten that day, choosing to omit the two bowls of Special K, but including the rest. Of course, instead of using 3 pieces of turkey bacon, I used vegan bacon to create a BLT on thinly sliced, low-calorie bread, (a bread the calorie-conscious Cher would appreciate), and refrained from cutting the sandwich to match Josh’s un-halved one in the film. I also made sure to have the handful of popcorn, 3 pieces of licorice, and instead of peanut butter M&M’s, 5 vegan M&M’s.

I also had to include a Diet Coke since it is featured so heavily throughout the film, as well as Cher’s afterschool snack of carrot sticks. Additionally, I included a Blow Pop, which is inspired by the scene where Dionne has one while Tai recounts her near-death experience during one of the several lunchtime scenes.

Finally, for the place setting, I really had no choice but to use a yellow plaid fabric for the tablecloth, inspired by Cher’s iconic matching skirt suit ensemble.

Thank you so much for reading this week’s installment! If you are in need of another post to satiate your back-to-school spirit, check out my vegan pairing for The Breakfast Club. Until next Wednesday!