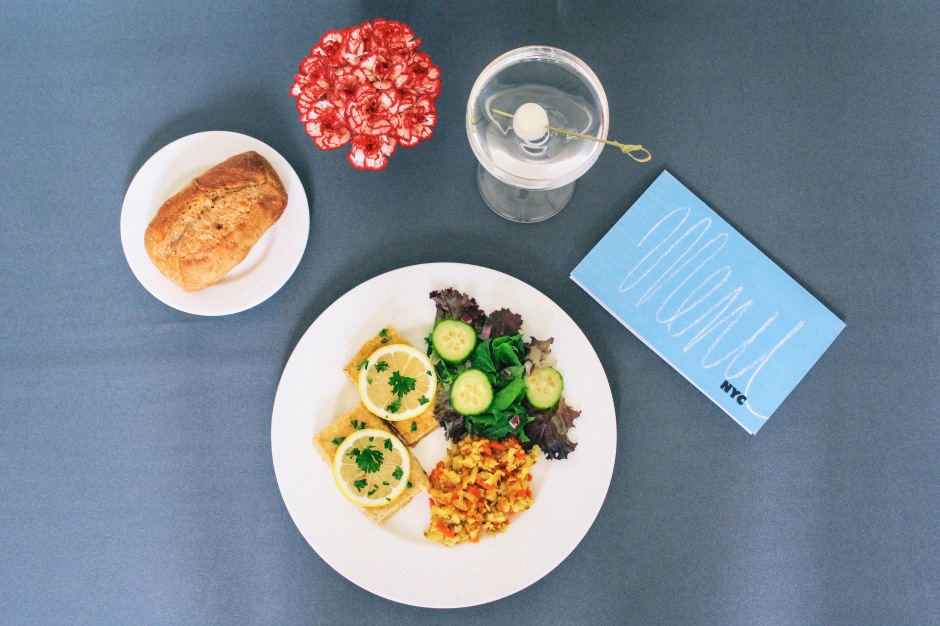 Welcome back to food & a film! Seeing as the very first pairing on this blog was for Rear Window (1954), a film directed by Alfred Hitchcock, it seems only fitting to have the very first pairing back from intermission be for a Hitchcock film as well. This post marks the fourth Hitchcock pairing on food & a film (→ second & third), and will certainly not be the final; however, it will be the only Hitchcock pairing for this year so I hope it holds you over!

Released in 1959, North by Northwest follows New York City advertising executive Roger O. Thornhill (Cary Grant) as he is mistaken for a government agent by a group of foreign spies, and is forced to go on the run, meeting Eve Kendall (Eva Marie Saint) along the way. 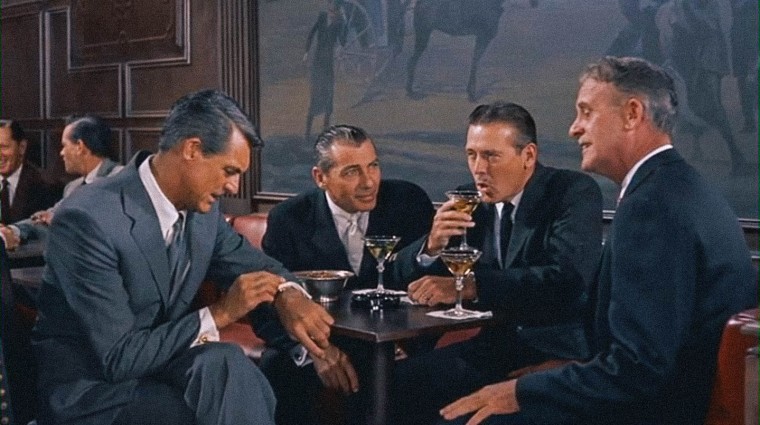 While this film is not quite filled with food moments, it does contain a bevy of beverage moments, which are mostly all alcoholic. The first boozy beverage moment is when Roger meets up with business colleagues for martinis at the Plaza Hotel’s Oak Room. 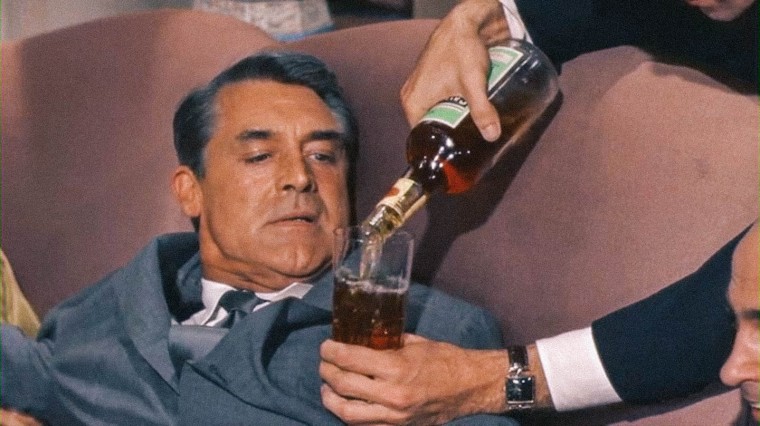 The second, and most memorable drink moment in the film is the pouring of the disturbingly large glass of bourbon, which Roger is then forced to drink (off-screen), without a chaser. 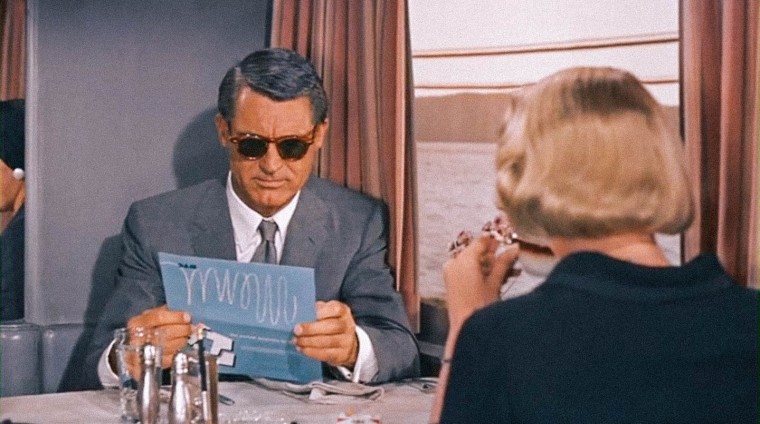 The film’s next cocktail is a Gibson, which Roger orders to precede his dinner with Eve on the train. While Roger gives the menu a once-over, Eve, who has already eaten, sips a cup of coffee and recommends the “brook trout,” which she says is “a little trout-y, but quite good.” 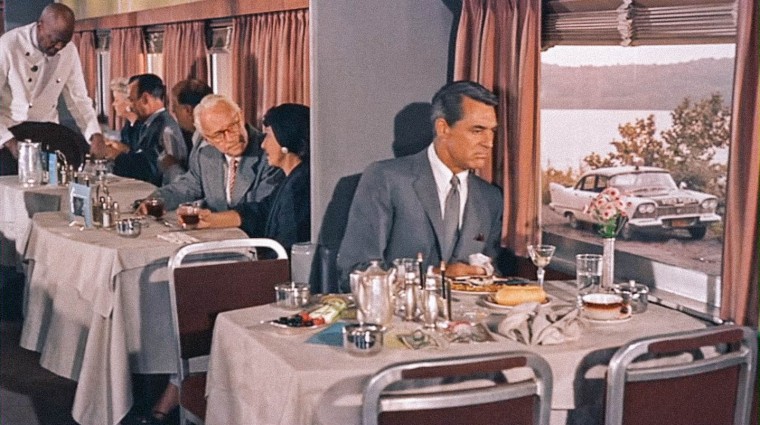 Before Roger gets up from the table upon finishing his train trout, there is a medium long shot of the dining table. In addition to Eve’s cup & saucer and Roger’s Gibson and plate of brook trout, there appears to be a small loaf of bread on the table, as well as a dish containing what looks to be fruit and yogurt, which presumably Eve ordered along with her post-dinner coffee. 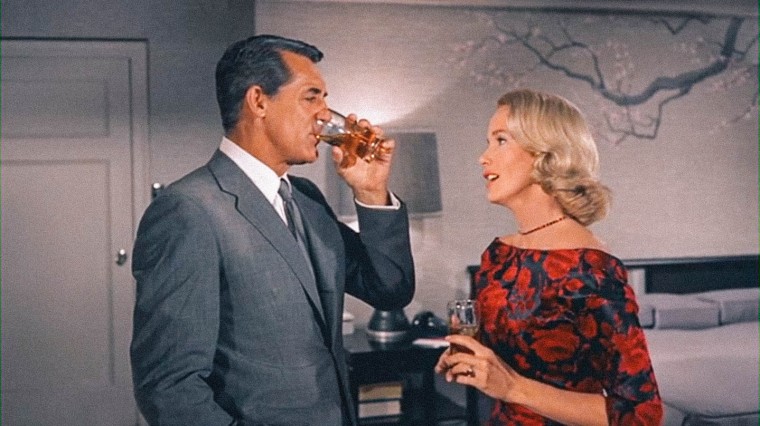 Another boozy beverage moment worth noting is when Roger finds Eve in a hotel in Chicago and tells her he could use a drink. Eve pours the two of them each a glass of scotch with water from her minibar before Roger tries to unsuccessfully convince her to have dinner with him. 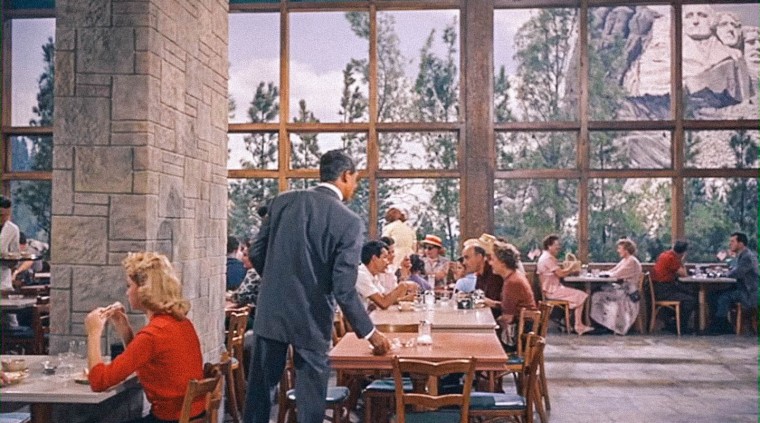 Lastly, the film’s final food- or-drink-related scene worth mentioning takes place at the Mount Rushmore cafeteria, where Roger gets himself a cup of coffee before his precarious meeting with Phillip Vandamm (James Mason). Ultimately for my North by Northwest inspired-menu, I decided to create a vegan version of Roger’s train meal on the 20th Century Limited, which was an express passenger train on the New York Central Railroad from 1902 to 1967, and traveled between NYC and Chicago along the railroad’s “Water Level Route.” Interestingly enough, the menu that Roger orders off of was the actual 20th Century Limited dinner menu from 1958, the year North by Northwest was filmed. This particular menu, however, does not appear to offer “brook trout,” although I did find trout on a different 20th Century Limited menu, which confirms that the dish was available to order at some point. 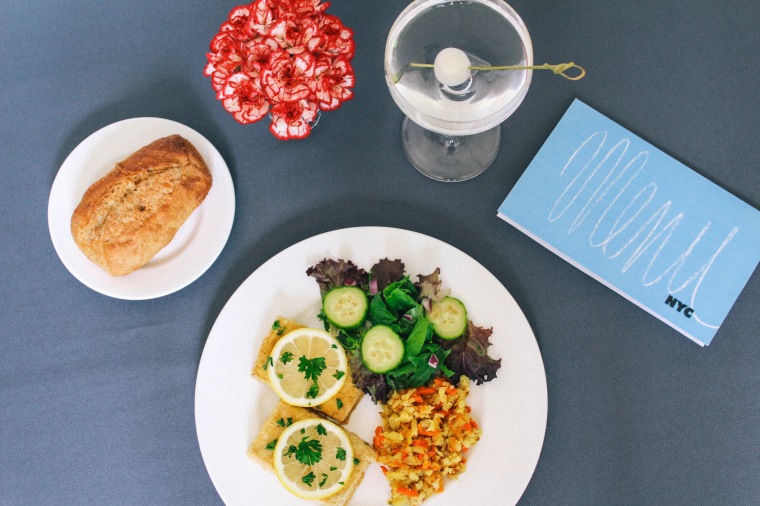 For my vegan version of brook trout, I decided to go with tofu, which I coated in olive oil, battered in cornstarch and garlic powder, and baked for 40 minutes in a 400 degree oven, turning once halfway through. I opted to forgo a sauce for my faux fish and instead topped the tofu with slices of lemon and chopped parsley, which despite initially being strictly for aesthetics, provided the tofu trout with lovely flavor. 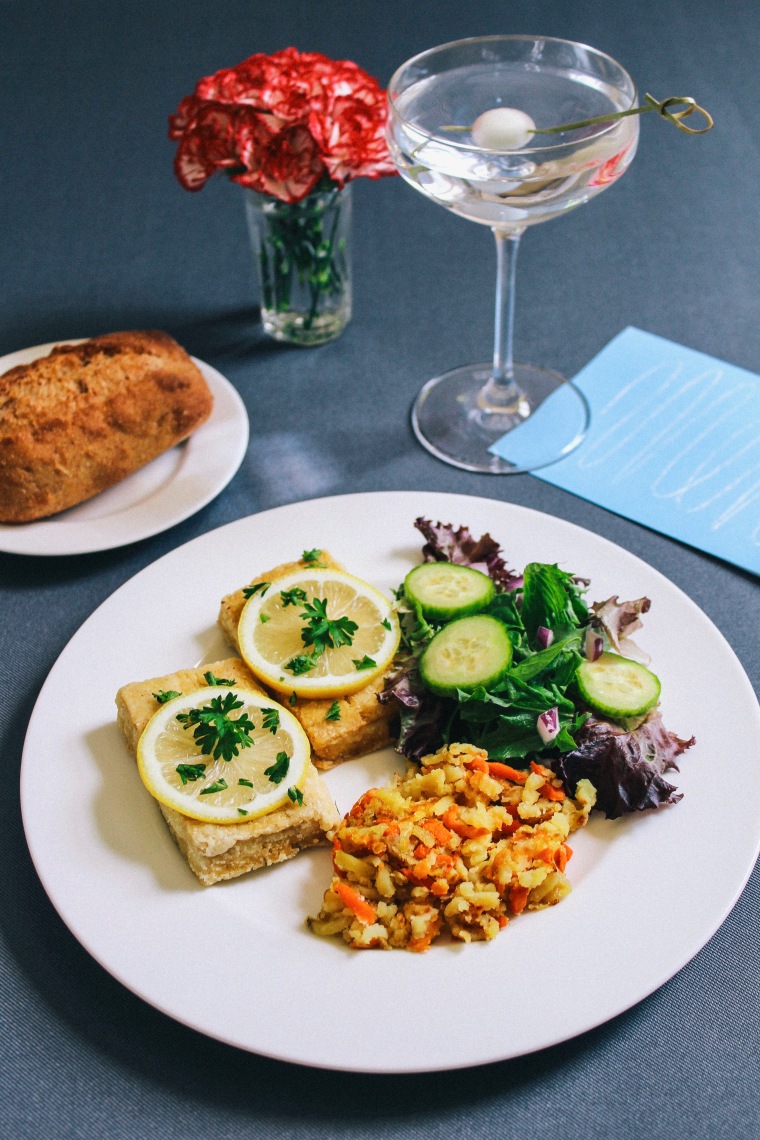 Since majority of the dinner options on the 20th Century Limited came with sides of green vegetables and potatoes, I ultimately chose to pair the tofu trout with a simple green salad of lettuce, sliced cucumbers, and chopped red onion, as well as a side of root vegetable hashbrowns for the potato component. Also, in addition to including a dinner roll, I could not forget the Gibson cocktail, of course, complete with pickled onion garnish. 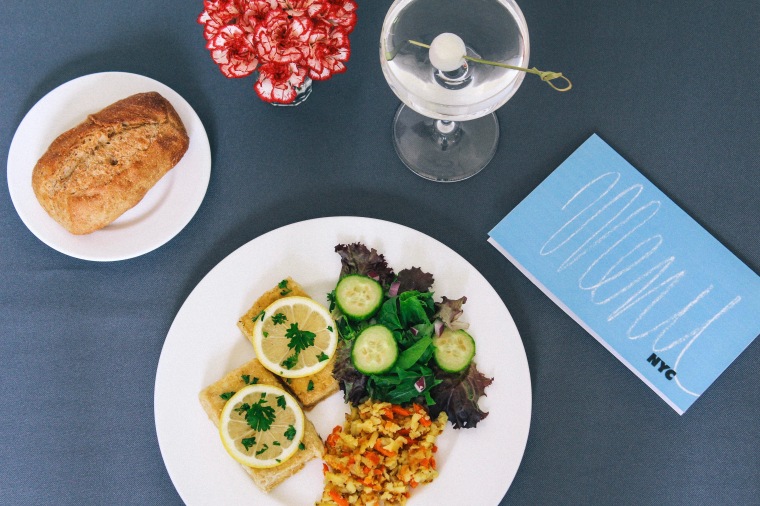 Finally, for the table setting, while I could not find delicate chrysanthemums similar to the ones on the 20th Century Limited, I still felt compelled to include a small arrangement, for which I settled on carnations. Naturally, the tablecloth is inspired by the iconically gorgeous suit worn by Cary Grant throughout the film. And there you have it! Thank you so, so much for reading this week’s post. I am so glad to be back, and hope you are, too. Until next week!

2 thoughts on “North by Northwest”