A wildlife theme park experiences an extensive malfunction during a preview tour allowing its cloned dinosaur exhibits to escape and run wild. Jurassic Park (1993) is not only an incredible, thrill ride of a film; it is a film filled with fantastic food moments, making it the perfect addition to food & a film. I should also note that the reason why I specifically wanted to publish this post this week is because today, June 7th, is the day, back in 1993, that John Hammond persuades Alan Grant and Ellie Satler to visit Jurassic Park. Tomorrow, June 8th, is when Dennis Nedry meets with Dodgson, and June 11th and 12th is when the disastrous preview tour takes place. 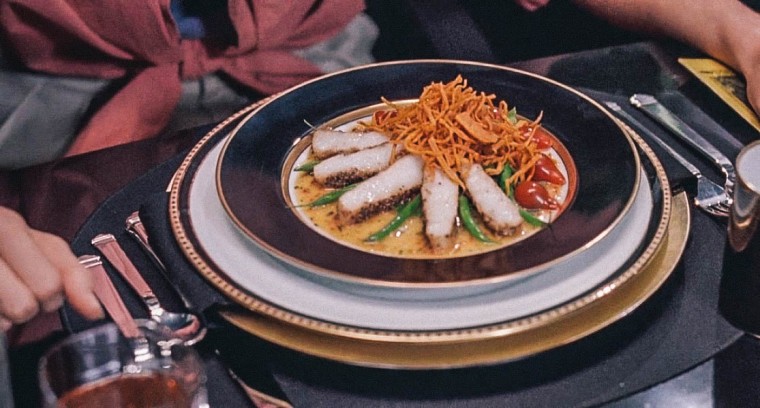 There were a few specific food moments that came to mind when I initially thought about crafting a Jurassic Park menu for food & a film. The first moment was the lunch of Chilean sea bass (above).

After the group witnesses velociraptors feasting on a live cow, Hammond announces, “Alejandro has prepared a delightful menu for us. Chilean sea bass, I believe.” Despite the beautifully plated dish, the tour attendees appear to have lost their appetites, understandably so. 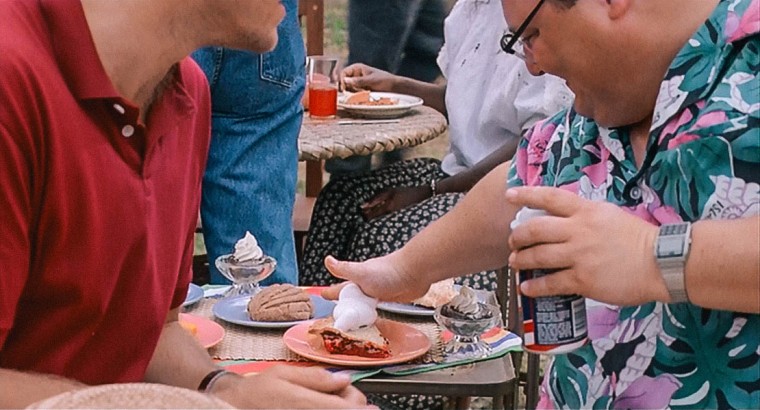 Another notable food moment is when Dennis Nedry meets with Dodgson at an outdoor restaurant in San Jose, Costa Rica. Dodgson arrives at the restaurant to find Nedry stuffing his face with Costa Rican cuisine. Dodgson convinces Nedry to steal the dinosaur embryos from InGen’s lab and provides him with a vessel – a Barbasol can – to safely transport the embryos. Nerdy tests the can, which produces a handful of shaving cream, and proceeds to discard of it by placing the handful onto a piece of cherry pie on a nearby dessert tray, passing it off as whipped cream.

The third, and arguably most iconic food moment from Jurassic Park, is while Lex is eating green jello, she spots a velociraptor and as she begins to tremble with fear, the jello wiggles on her spoon. The green jello is just one of the many foods offered in the abundant buffet that Lex and Tim indulge in at the Jurassic Park restaurant. 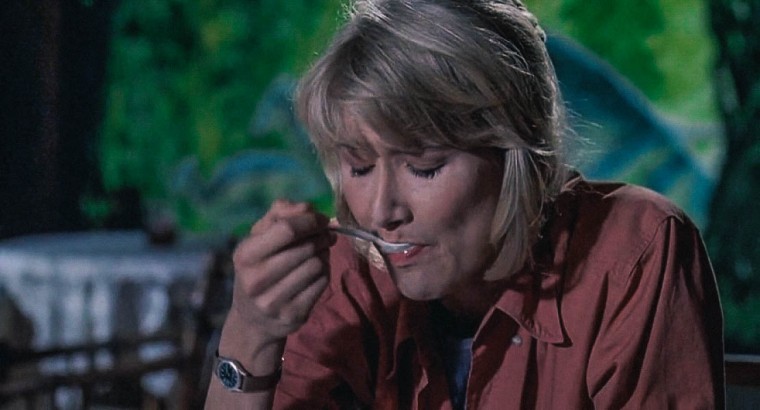 There is also an earlier scene set in the restaurant where Ellie joins Hammond who is seated at a table, eating various flavors of ice cream straight out of their respective containers. There are also several additional food and/or drink moments in the film including Hammond popping a bottle of Champagne in Montana, Malcolm drinking from a flask, and Nedry having Jolt cola & red licorice at his desk. Furthermore, in addition to the large package of Reese’s peanut butter cups visible on his desk, Nedry, before leaving to steal the embryos, asks, “Anybody want a soda or something?” He explains, “I’m going up to the machine and I thought, you know, maybe I would get something ‘cause I’ve had all of these sweets and I think I’m going to get something salty.”

Since there are so many food appearances to chose from, I ultimately decided to recreate several different moments from the film for my food & a film pairing. First, I chose to prepare a vegan version of the Chilean sea bass, substituting the sea bass with tofu. I tried my best to recreate the plating of the original dish with pealed carrot, grape tomatoes, string beans, and a peanut coconut sauce. The above photo is roughly what the dish would look like from Ellie’s point of view when it is placed in front of her.

The second food moment I wanted to include is the iconic green jello. I should note that typically jello is not vegan, or vegetarian, since it usually contains gelatin. Interestingly enough, Lex is a vegetarian in the film so I find it a bit strange that she is eating jello. However, it is possible that the jello she is eating was specially prepared with Agar Agar flakes, which is what I used to prepare a vegan version.

Lastly, the third and final food moment I wanted to include is the slice of cherry pie topped with cream – whipped, not shaving. Unfortunately, I was not able to get my hands on custom Jurassic Park china so I settled on a tropical leaf-patterned tablecloth and a can of Barbasol to complete the place setting.

Thanks for tuning in for this latest installment of food & a film. Until next time!

One thought on “Jurassic Park”