Pulp Fiction (1994) begins and ends in a diner. Not only is it the same diner, it’s the same scene. Director Quentin Tarantino bookends his film with this scene, which to start, opens on a couple (Pumpkin & Honey Bunny), who have just finished their breakfast and are about to rob the establishment. Before whipping out their guns and barking orders, the pair discuss, over a final cup of coffee, the brilliant idea of robbing a restaurant, as opposed to a bar, bank, jewelry store, etc.. Between the diner setting and the robbery discussion, this opening scene is a rather poetic nod to Tarantino’s first and previous film, Reservoir Dogs.

The scene plays out again at the end of the film, this time opening on Vincent and Jules having their breakfast – pancakes and bacon for Vincent and a muffin for Jules.

The film’s second scene opens on Jules and Vincent in the car on their way to a job. Having just returned from Europe, Vincent explains to Jules that you can buy a beer at movie theaters there, as well as at McDonald’s in Paris, and that a quarter pounder with cheese in Paris is called a “Royale with Cheese,” and a Big Mac is called “Le Big Mac.” Vincent also adds that they put mayonnaise on French fries in Holland instead of ketchup. The camera follows Jules and Vincent as they park and walk into a building before entering an apartment, where the occupants are all enjoying a fast food breakfast from Big Kahuna Burger, a Hawaiian burger joint.

Jules, who has never had a burger from Big Kahuna Burger, asks Brett if he can try his, and after taking a bite exclaims, “Mmm! This is a tasty burger.” Jules then goes on to say that he usually can’t get burgers because his girlfriend is a vegetarian, which pretty much makes him a vegetarian; however, he does love the taste of a good burger.

The Big Kahuna Burger sequence is not the only burger moment in the film, however. Later into the film Vincent and Mia go out to dinner at Jack Rabbit Slim’s, 1950s-themed restaurant that Vincent describes as “a wax museum with a pulse.” While seated in a Chrysler convertible car booth, a server (played by Steve Buscemi!) dressed as Buddy Holly, takes their orders.

Vincent, in the mood for steak, orders “The Douglas Sirk steak” cooked “bloody as hell,” and a Vanilla Coke. Mia orders the “Durwood Kirby burger, bloody, and the $5 shake.” Buddy asks, “How do you want that shake? Martin & Lewis or Amos & Andy?” To which she replies, “Martin & Lewis” – a vanilla milkshake. 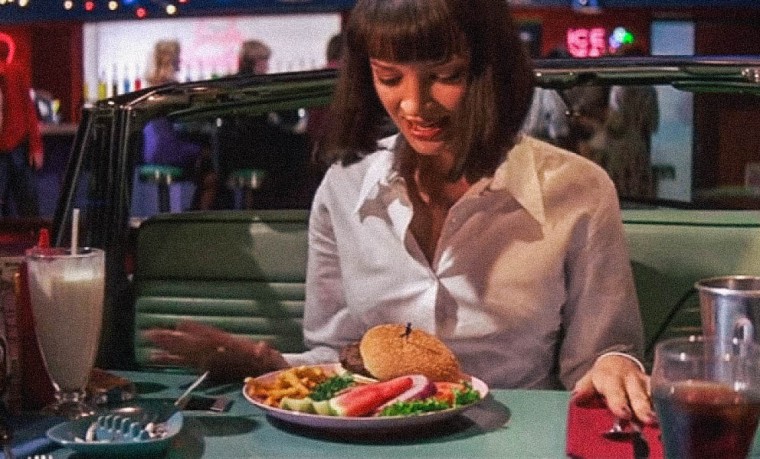 Notably, there are several additional scenes containing food moments including Lance eating a bowl of Fruit Brute cereal, Fabienne describing to Butch the decadent breakfast she plans to have, Butch preparing frosted cinnamon toaster pastries in his apartment, and Marsellus carrying a box of doughnuts and a couple of coffees before being hit by a car with Butch behind the wheel.

Additionally, there is Jimmie’s “serious gourmet” coffee, which the Wolf takes with “lots of cream, lots of sugar.”

Since there are a multitude of food moments in Pulp Fiction to choose from, I ultimately decided  to combine food from a couple of scenes for my culinary homage and prepare a vegan burger and fries from Big Kahuna Burger; however, instead of completing the meal with a Sprite, I chose the Martin & Lewis $5 shake from Jack Rabbit Slim’s. 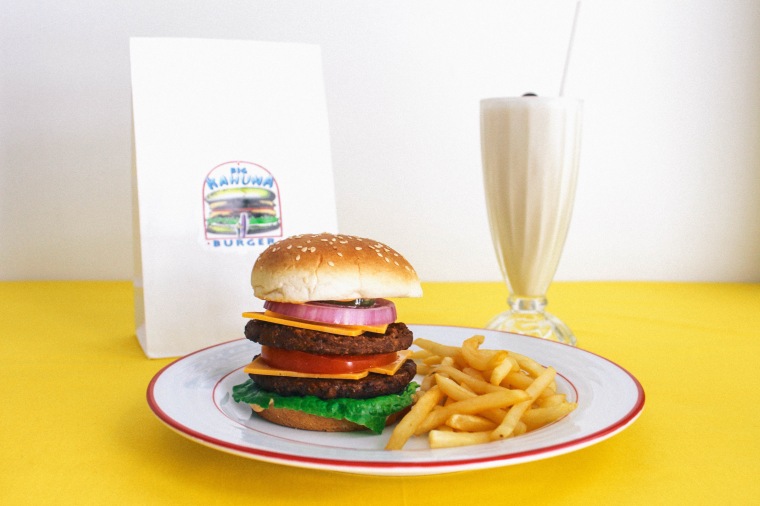 The burger that Jules tries a bite of looks like a standard fast food burger – a single patty with a slice of American cheese, iceberg lettuce, chopped white onion and ketchup.  However, I wanted to make my version similar to the one in the Big Kahuna Burger logo, which is a bit more elaborate and looks even more delicious. Instead of one patty, I went with two on a sesame seed bun with romaine lettuce, tomato, vegan cheddar cheese, red onion for a bit more color, dill pickle chips, and some special sauce, veganized of course.

For the Martin & Lewis $5 shake, I did not end up following a recipe, but instead threw some ice cubes, vanilla almond milk and vegan vanilla ice cream in a blender and combined until I got a good milkshake consistency.  After trying to find out whether maraschino cherries are vegan or not (still unclear), I decided to use a dark morello cherry to top off the milkshake, which explains why the cherry is more purple than red. As for for the plating, I used the same diner plate that I used for Reservoir Dogs, the same style of milkshake glass from Jack Rabbit Slim’s, found a Big Kahuna Burger sticker to make the takeout bag and some Tarantino-yellow fabric for the tablecloth.

That does it for this week’s installment here on food & a film. Thanks for reading – until next time!