When a diamond heist goes wrong, the thieves begin to suspect that one of them is a police informant. Directed by Quentin Tarantino and released in 1992, Reservoir Dogs opens with eight men seated around a table in a Los Angeles diner. The unacquainted crooks, brought together by a veteran swindler, engage in small talk as they finish up their breakfast. The topic of conversation jumps from Madonna’s song “Like a Virgin” to the practiced social custom of tipping before they depart the diner to carry out the intricately planned robbery.

Arguably, due to the fact that the men are at the end of their meal and generally finished eating, we do not see much of the food on the table. Ketchup bottles and sugar packets are visible, as well as water glasses and coffee mugs; however, we do not really see food, with the exception of a piece of toast that Mr. Pink tears and uses to wipe up whatever savory residue remains on his plate. There is a lot of smoking (hello, early 90s!), as well as some beer drinking by Nice Guy Eddie Cabot, but despite taking place in a diner, food is not really featured in this scene. The scene was filmed at Pat & Lorraine’s Coffee Shop, a diner on Eagle Rock Boulevard in Los Angeles that is still open and serves classic American breakfasts & Mexican dishes.

There is another scene with food that appears further into the film, which according to the script, takes place at a Denny’s; however, the scene was actually filmed at Johnie’s Coffee Shop in Los Angeles. During this scene the food is a bit more visible than the earlier diner scene; Holdaway has a plate of food, as well as a couple of beverages including a strawberry milkshake, with Mr. Orange having a cup of coffee, and it looks like Holdaway has pancakes on his plate instead of the bacon, cheese and avocado burger like the script specifies. The script also describes that as Holdaway waits, “he practically empties an entire bottle of ketchup on his french fries, not by mistake either — that’s just how he likes it.”

In addition to these two scenes involving food, there is the scene where Mr. White and Mr. Orange stake-out the jewelry store before Mr. White declares, “I’m hungry, let’s get a taco.” Moreover, there is a great beverage moment when Mr. Blonde enters the warehouse drinking a fountain soda, which he presumably picked up at a drive-through on his way back from the robbery.

When thinking about the pairing for this film, and deciding on which food moment to choose from, I ultimately wanted to go with a classic diner dish since the opening scene is so iconic. When I think of classic diner dishes, one of the first that comes to mind is a turkey club sandwich, complete with a side of French fries, coleslaw & a pickle. Of course, the standard diner breakfast plate: 2 eggs, bacon or sausage, home fries & toast would have arguably been more fitting since the men are having breakfast at Pat & Lorraine’s Coffee Shop and the dish appears on their menu, but for whatever reason, when I first thought of what to pair with Reservoir Dogs, I thought of a turkey club. And of course, just like Holdaway, I like a ton of ketchup on my fries too. 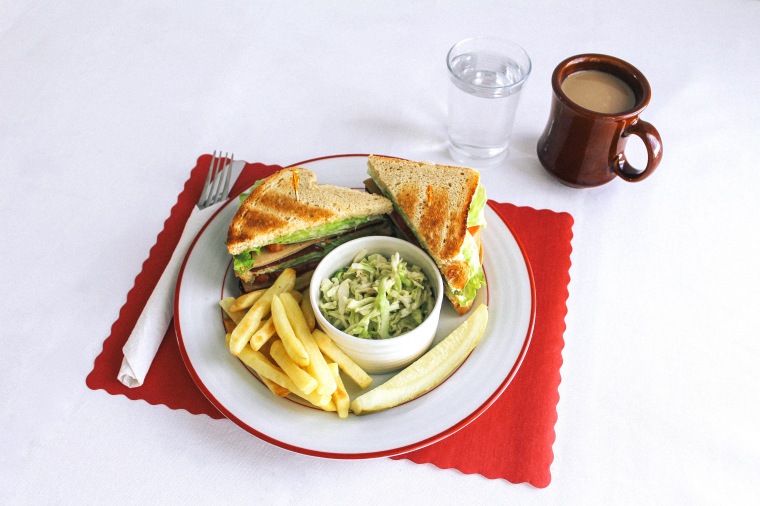 If anyone is unfamiliar with the turkey club sandwich, it is essentially a turkey sandwich with bacon, lettuce, tomato and mayonnaise; however, double-decker construction is essential in order for it to be a proper club sandwich. Because there is a lot of layering, the key is to keep the layers light and to not have too much of any one component. Ideally, your club sandwich will also have frill toothpicks –please do not overlook this imperative item. To make my turkey club sandwich vegan, I used this for turkey, this for bacon and this, which is my favorite vegan mayonnaise. Also, in addition to pairing my turkey club with French fries and a pickle, I also made some incredibly tangy and delicious coleslaw using some vegenaise while following this recipe. 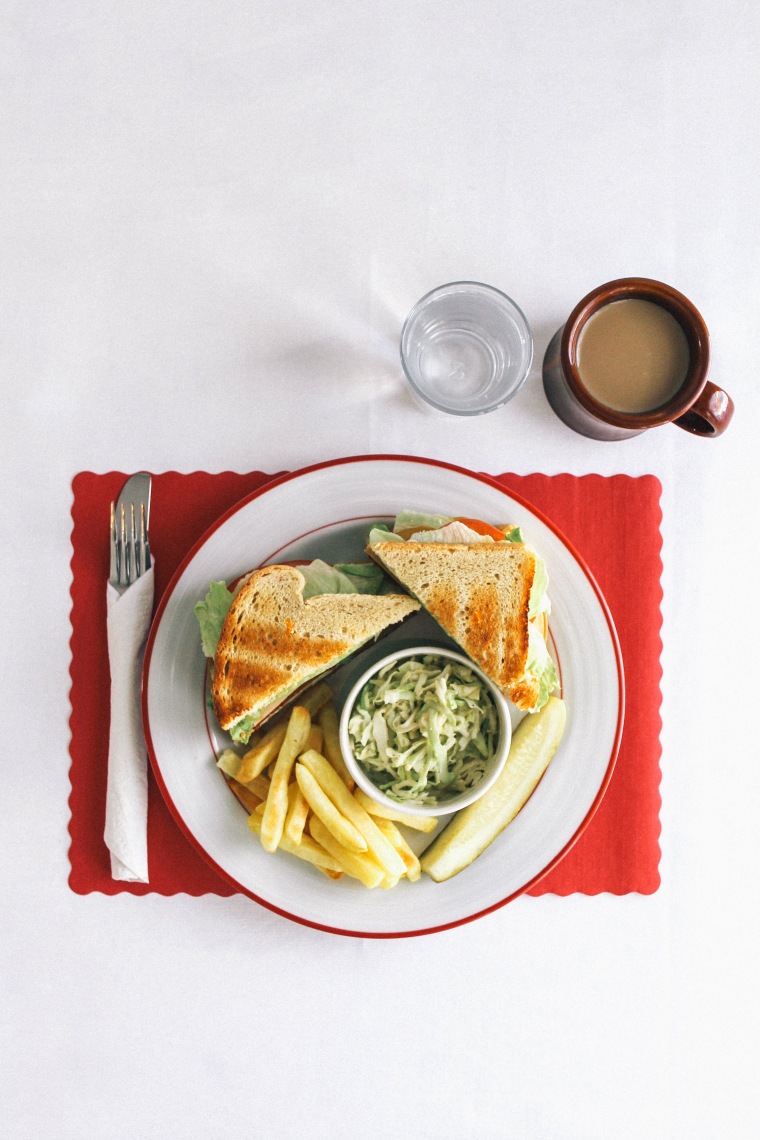 For the place setting, I wanted it to keep it classic and uncomplicated, just like a black suit and a pair of wayfarers. I tracked down a paper placement, just like the one used in the diner; however, instead of going with the light blue color used in the film, I went with red, mainly due to the amount of blood in the film. I also was able to find a brown coffee mug exactly like the ones used in the diner scene. They are fairly common, but typically only sold in bulk since they are designed especially for restaurants.

Alfred Hitchcock is assuredly my all-time favorite filmmaker; however, Quentin Tarantino is undoubtedly my favorite living filmmaker. Not only do I love every single one of Tarantino’s films, but all eight of his films feature food in some way. Consequently, you can expect to see pairings for the rest of his filmography on food & a film sooner or later. Until next time!